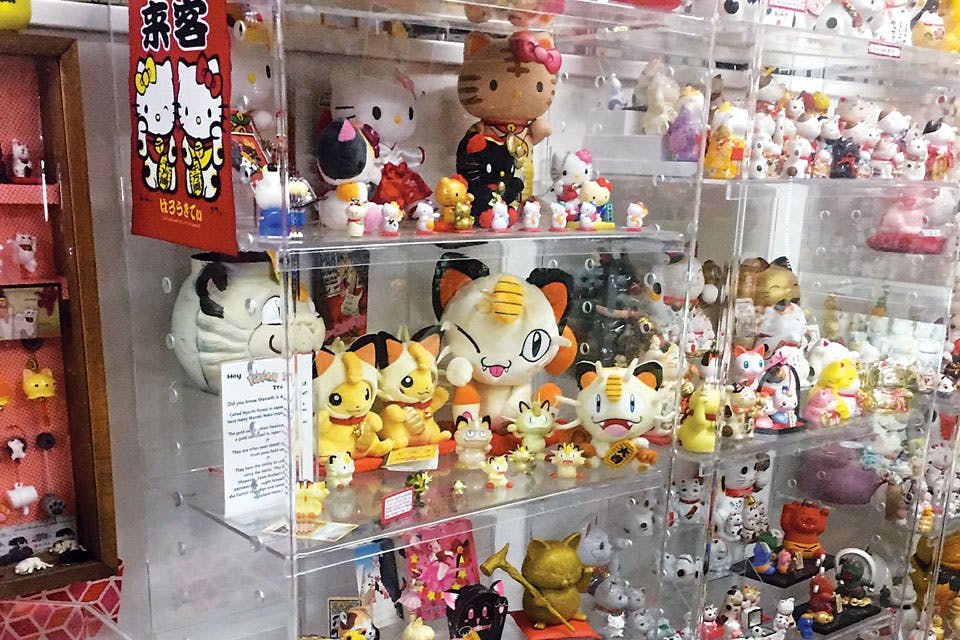 Half an hour from Tokyo Station you’ll find Gotokuji, a quiet temple that offers a break from the energy of the city. It’s known for welcoming serenity-seeking tourists, but there’s another thing to know about Gotokuji: the place is filled with statues of cats raising their paw in the air.

“There’s multiple versions of the legend. We like the one that’s tied to the Gotokuji shrine,” says Micha Robertson, owner of the Lucky Cat Museum in Cincinnati.

As the story goes, the temple was crumbling — the home of a single priest and his cat — until one stormy evening, when a traveling nobleman took shelter from a driving rain beneath a nearby tree.

“In the far distance, he can see the cat, and the cat starts beckoning to him, waving his paw,” Robertson explains. “So, he left the tree, and as soon as he reached the cat, lightning struck the tree. And so [the cat] became the official patron of the temple as a thank-you.”

Robertson is unsure when the first lucky cat statue was created, but research dates some of the oldest specimens to 1852. Since then, various interpretations of the maneki-neko, or “beckoning cat,” have only grown.

“I have some pieces from that shrine,” Robertson says of Gotokuji, which has hundreds of white cat figures stacked on shelves in its gardens.

The look of the cat with its raised paw has changed over the years and from manufacturer to manufacturer. There are chubby white felines, grinning calicoes and sleek black cats with a variety of dress and facial expressions. But one paw is nearly always lifted, waving to beckon fortune (the left paw) or company (the right paw). And while Robertson’s museum houses more than 2,000 varieties of the famous feline, she started with just two.

“I’m very good at collecting, and I’ve always been a fan of cats and Japanese culture,” she says. A friend picked the first one up for her at an Asian food store, while Robertson bought the second one at a thrift shop.

Robertson searches eBay, Yahoo Japan and Facebook groups for new additions, including T-shirts, keychains, mugs and books — one of which has informed some of her favorite purchases. Inside the 100 Lucky Cat Art Book, 100 artists share their version of the maneki-neko. Robertson even met one of her favorite artists at a toy convention in 2019, bringing the collar of one of her cat statues to be autographed by its designer, Konatsu Koizumi.

“She signed [the collar] for me and drew a little lucky cat on [it],” Robertson says.