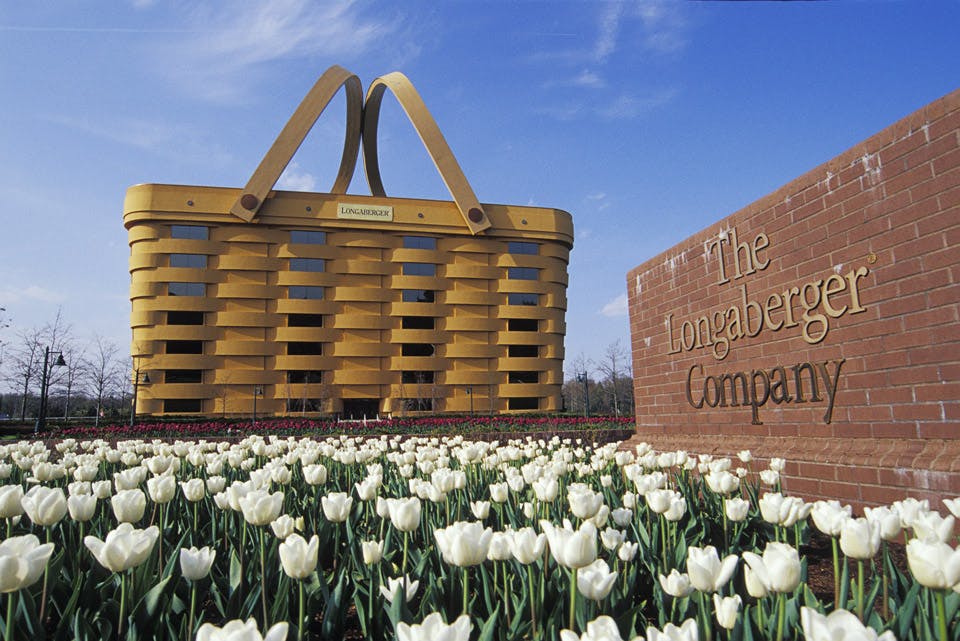 Company founder Dave Longaberger came up with the idea for the imaginative and attention-getting 180,000-square-foot building in 1994

The Longaberger Co.’s seven-story headquarters in Newark gives those who see it the fleeting impression that they’ve stumbled across a giant’s afternoon outing with the family.

Company founder Dave Longaberger came up with the idea for the imaginative and attention-getting 180,000-square-foot building in 1994, after the business had outgrown its former home in Dresden, Ohio.

Longaberger wanted the new headquarters to look like the company’s famous medium market basket and put the call out to architectural firms. But he had a tough time finding one that seemed to understand his vision.

“He went through meeting after meeting with these firms, and he was increasingly disappointed that nobody was really getting it,” explains Brenton Baker, The Longaberger Co.’s director of communications.

Townspeople and even some employees were skeptical about the prospects of successfully creating such an unusual structure, but the company founder remained undeterred.

“[Dave Longaberger]  was famous for saying, ‘If we can put a man on the moon, we can build a building that looks like a basket,’ ” says Baker.

Eventually, global architecture firm NBBJ, which has an office in Columbus, accepted the challenge.

“I was asked to help out the team that was designing the basket,” recalls Luis Rivera, who now works for Nandinee Phookan Architects in Brooklyn, New York. “It was the talk of the office.”

The building features a 30,000-square-foot atrium, and its main floor tiling mimics the look of the bottom of one of the company’s woven baskets.

The exterior design required a lot of attention too, right down to the appearance of woven bands and wooden handles.

“I think the most difficult part of the whole thing was the handles, believe it or not,” says Rivera, explaining that each one weighs 75 tons. It required the building’s designers to evaluate how the handles would support their own weight and react to high winds.

“That’s hollow steel,” he adds. “We actually bent steel plates to form the shape of the basket.”  — Frances Killea