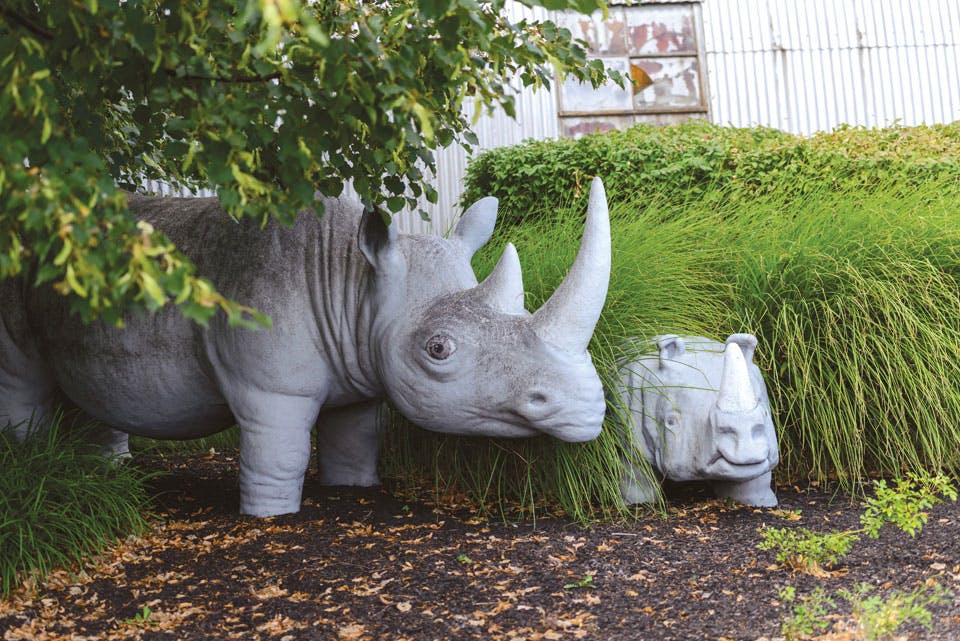 Two rhinoceroses lounge by wispy bushes, while a family of zebras rests in the shade of a tree. Not far away, a lion hides in low shrubbery.

But this Serengeti-like scene is far removed from the African continent. It’s not even happening at one of our state’s zoos. Instead, the fiberglass menagerie fills the yard at a steel-heat-treatment center in northeast Ohio.

On the inside, MT Heat Treat is filled with gray metal drums and yellow guardrails. Outside, trucks back in and out of the driveway all day long, and it’s there that owner Judy Mathews and her late husband, O.V., decided to bring a sense of humor and adventure to their operation.

In fact, Judy’s Jungle started as a joke more than 20 years ago, after a customer remarked that MT Heat Treat’s ceilings were high enough to house a giraffe.

So, the Mathews purchased three fiberglass ones from a business in nearby Chesterland and began to grow their collection from there.

“Everybody thinks it started with the elephants, because the elephants are closest to the road,” says Sonja Blank, office manager at the business and daughter of O.V. and Judy Mathews. “That was the next thing we got [after the giraffes], because Judy’s favorite animal was elephants. Then it was like, what else can we get?”

Now, the yard is crawling with critters, from a Stegosaurus named Loganberry to a Tyrannosaurus rex dubbed Heater to a duo of penguins that go by the names Fahrenheit and Celsius. There’s even an oversize praying mantis.

Although the company’s collection was created with customers in mind, MT Heat Treat also happily welcomes school groups and visitors who want to explore “O.V. Avenue” and “Judy Lane,” and the animals have served a vital purpose as landmarks for those visiting the business for the first time.

“When we give directions,” says Blank, “we tell people to turn in past the elephants.”