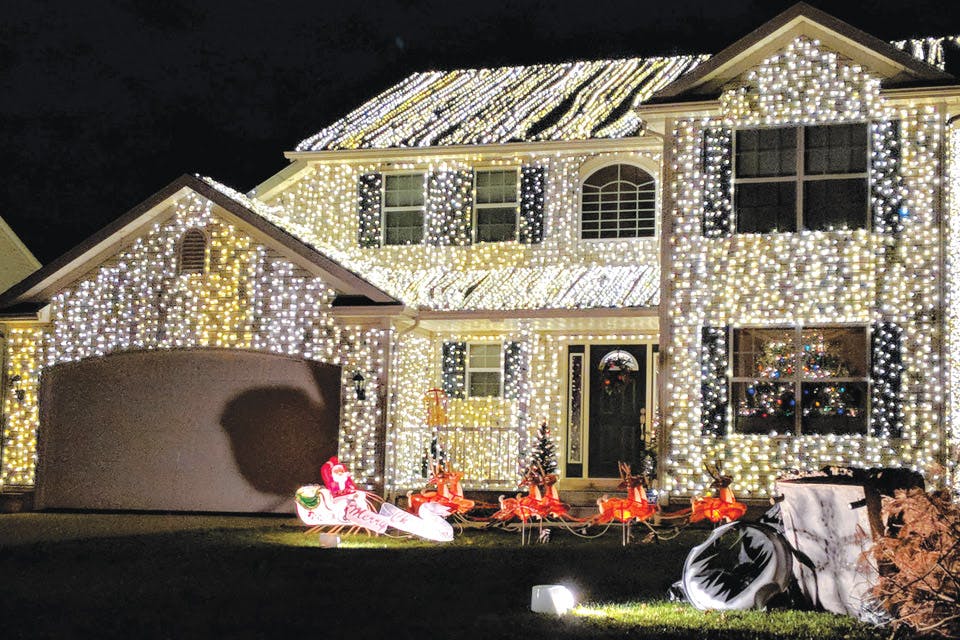 Eleven months out of the year, 173 Duane Lane in Wads-worth is a typical home: an unassuming colonial with an attached garage and a tidy lawn. The day after Thanksgiving and for the month of holiday festivities that follow, however, the house transforms, donning a grand total of 25,000 lights.

It’s the kind of Christmas display that would make Clark Griswold proud, and that’s the point. Greg and Rachel Osterland channel the patriarch of the 1989 movie “National Lampoon’s Christmas Vacation” as they decorate for the holidays each November.

“In every way you can imagine it’s like the movie,” says Greg Osterland. “I do the whole speech, the drumroll happens, we light the lights.”

It’s not just a sense of humor that motivates Osterland to decorate his house in the famous film’s image. The holiday classic has a significant place in his family’s history.

Years later, when he and Rachel began looking for a house to buy, he knew he needed it to play the part of the Griswold family home each December. When they settled on Duane Lane in Wadsworth, they were one of just a few homes in the development, but their neighbors approve of their bright idea.

“Every person that bought and built their house, they all love it,” Osterland says. “They look forward to it every year. My neighbor, God bless him, he’s 68, and he takes a whole week off of work to help me put up these lights.”

With drive-by visitors numbering up to 1,000 during the season, the couple also uses their lights to raise awareness and up to $2,500 annually for the Cystic Fibrosis Foundation and its affiliated Great Strides walk.

“I have cystic fibrosis, so I’ve grown with it, I’ve seen people who have it, I’ve seen friends who were here that aren’t here anymore,” says Osterland. “All the money going to Great Strides … goes to the research behind it. There are so many new drugs out there. … Ideally, five, 10 years down the road we’re looking at the actual cure for it.”