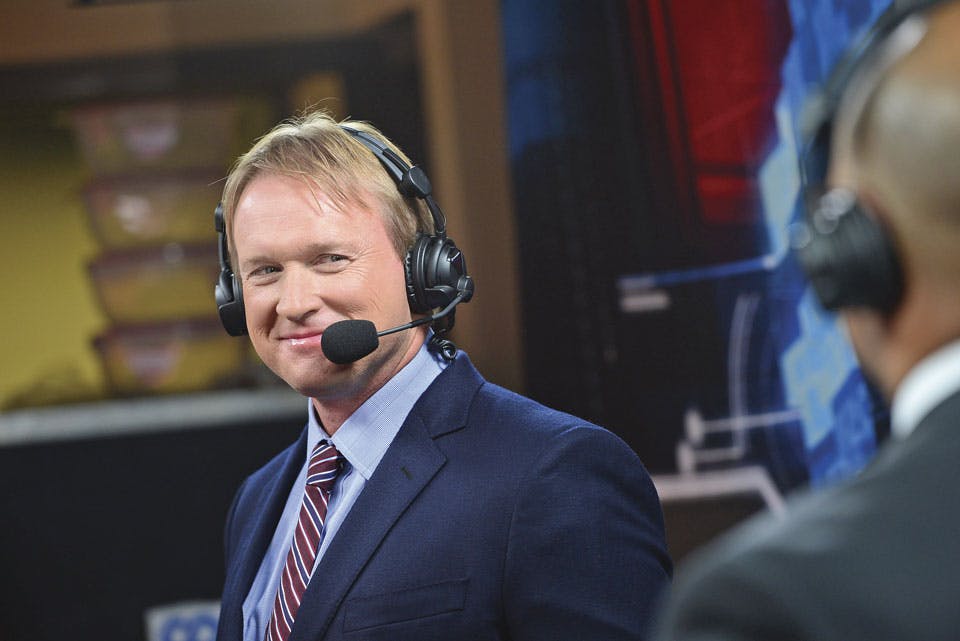 The “Monday Night Football” analyst and Sandusky native discusses growing up in Ohio, his father and football.

Some NFL coaches are infamous for burning the midnight oil. That was never the game plan for Jon Gruden, whose coaching days would begin at precisely 3:17 a.m. with his alarm clock blaring the Notre Dame fight song.

“That clock is no longer with me, but I still wake up at 4 or 5 a.m.,” says the 53-year-old Gruden. He’s calling from what he refers to as his “football funhouse,” an office in Tampa, Florida. “I’ve always functioned better in the morning. There are no distractions.”

Gruden, who coached the Tampa Bay Buccaneers to victory in Super Bowl XXXVII, was born in Sandusky and played football at the University of Dayton. He is widely known for a nearly maniacal obsession of collecting game films, which are stockpiled in a warehouse.

“My wife thinks I’ve lost my mind and I’m starting to agree with her,” he says.

The energetic Gruden, who begins his eighth season as analyst on “Monday Night Football” Sept. 12, talks with us about his Ohio roots, his father’s influence and the state of high school sports.

What did you learn from your three seasons of football at the University of Dayton?
I wasn’t a very good player. I was a backup quarterback and held for extra points and field goals. But we won. I got to play in a big stadium for a hall of fame coach. I learned most of my valuable lessons there. The thing I was most proud of was that I stuck it out and finished. I never quit. I think that served me well as a father, a husband and a coach.

Your father, Jim, coached high school football in Fremont and Galion and served as an assistant at Notre Dame. How big of an influence was he?
My dad went to Orange High School and my parents met at Heidelberg. He was a football player who got into coaching at an early age, and I got bitten by the coaching bug because of him. I remember walking across the campus on Saturdays in South Bend. It gave me chills.

You are teaming up with Dick’s Sporting Goods for Sports Matter to raise funds for high school sports. What motivated you to start this project?
When I got fired [at Tampa Bay], I started to help coach my son’s high school team. I was really shocked at the state of the game. By 2020 a lot of schools aren’t going to have any high school sports and that makes me sick. We’re going to try and make a huge footprint in making the game strong again.