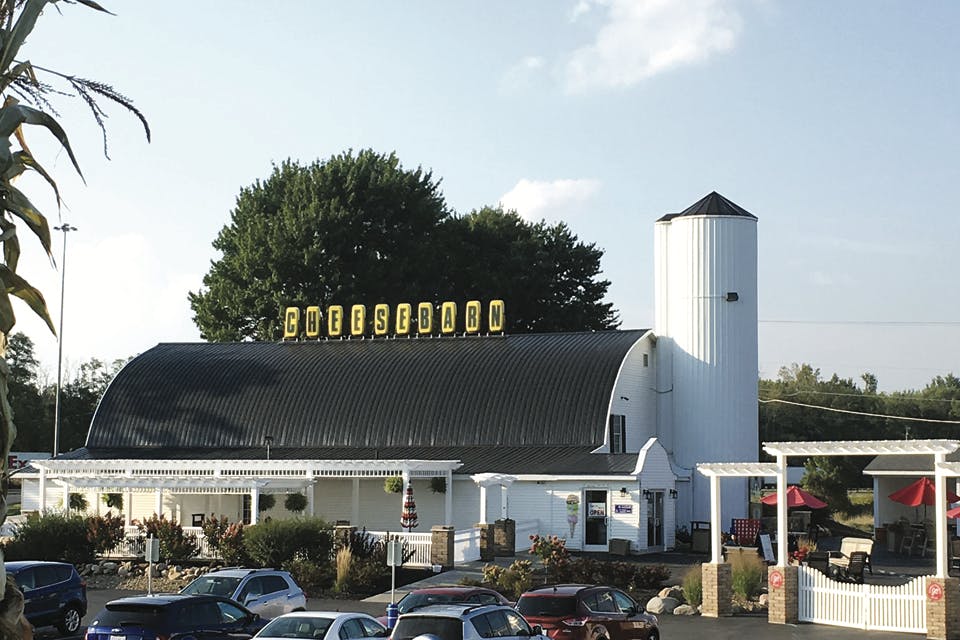 This roadside icon has become a favorite for Interstate 71 travelers since opening in 1978.

Ten yellow signs sit atop the curved roof of the barn just off Interstate 71. The structure isn’t unusual for this rural stretch of the state. But the yellow signs spelling out “cheesebarn” have cemented this place as an Ohio roadside icon.

“From my point of view now, as an adult, I can’t believe they did it,” says Mistie Hray, whose parents, Ronda and Richard Poorbaugh, opened Grandpa’s Cheesebarn in 1978. “They sold everything they had, including our house — everything — and bought this 20 acres of land that had a barn and a house on it from the neighbor next door.”

They launched Grandpa’s Cheesebarn with the help of Hray’s grandparents, Dick and Vera Baum, who previously operated a meat and cheese house Vera’s father started in West Salem in the early 1900s. Hray’s father, who was employed full time as a teacher, would work evenings, while her mother tended the store during the day. Hray and her siblings helped, too, filling orders for gift baskets during the holiday rush. Hray went on to a career in teaching, until her parents asked if she’d be interested in opening a second Grandpa’s Cheesebarn location.

“So, I came back and started the Norton store [in 2015],” she says. A third location inside Summit Mall in Fairlawn opened in 2018. But the original Grandpa’s Cheesebarn has beckoned travelers for decades now. The store carries hundreds of imported, domestic and local cheese varieties, but Swiss cheese claims the title of customer favorite.

The inventory doesn’t end there though. Baking mixes, pickles, preserves and crackers also line the shelves. In 1995, Hray’s mother launched Sweetie’s Jumbo Chocolates. If the choices seem overwhelming, Hray says the staff is happy to answer questions and even happier to share samples.

“We really, really, really want everybody to know that when they [visit], they’re family,” she says. “That’s what we strive for and why people go out of their way to come see us.”