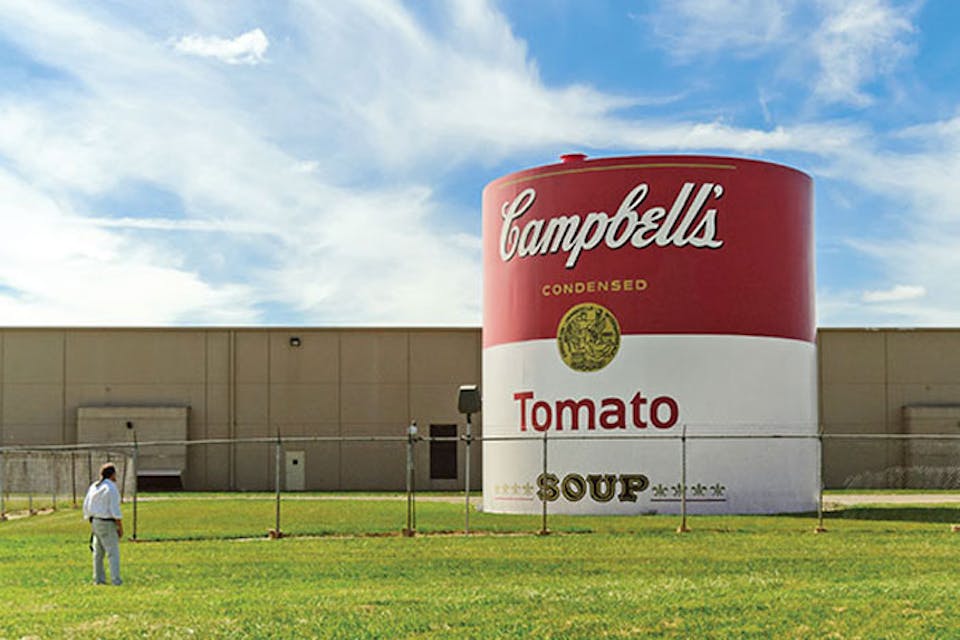 
The instantly recognizable red-and-white label beckons hungry passersby as they travel state Route 110. But at 33 feet wide and 33 feet tall, it would take a tractor-sized opener to flip the lid on the giant tomato soup can outside the Campbell Soup Co.’s Napoleon production facility.

Campbell’s has had a presence in Ohio since 1938, when it started making its V8 drink in Napoleon. Officials added a soup plant in 1957, and it’s now one of three U.S. facilities — the others are located in North Carolina and Texas — canning the brand’s famous varieties.

Over the years, the soup company also had factories in New Jersey, California and Illinois, but all of those plants closed their doors as new facilities were built.

Jamison Smith, director of human resources for Campbell Soup Co., says the Napoleon location has grown over the years because of its strategic Midwest location and a dedicated workforce.

He explains that the giant can outside the factory was labeled tomato soup as a nod to Campbell’s roots in Camden, New Jersey. “Tomato soup was the anchor,” says Smith. “New Jersey was a bountiful harvest location. ... That was the first plant.”

The can serves a functional purpose, too: It holds water for the warehouse’s sprinkler system. Installed in 1989 during one of three additions to the facility, the giant can has the capacity to hold 200,000 gallons.