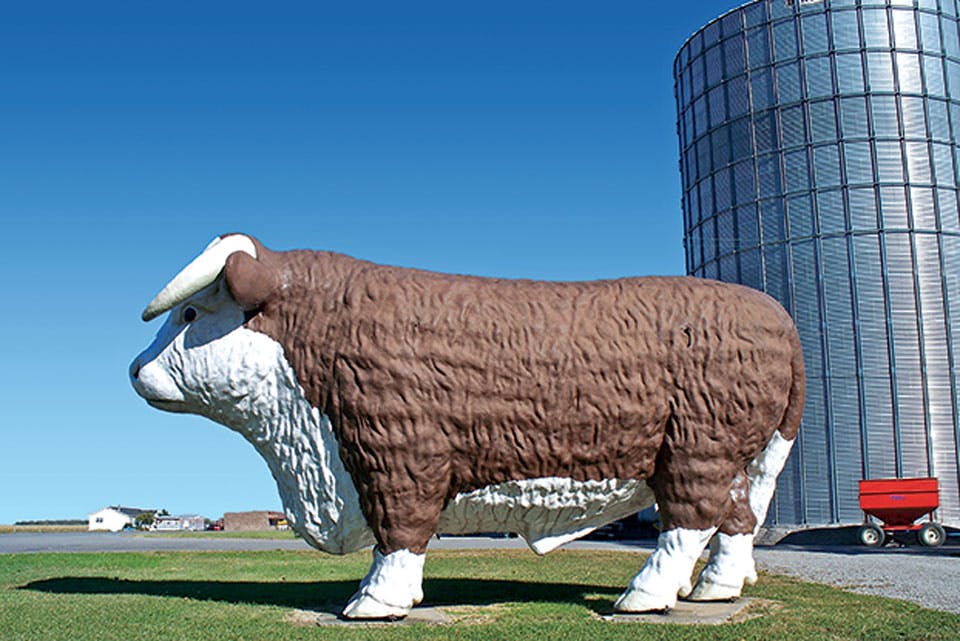 The giant fiberglass bull has been standing its ground on state Route 224 since the 1970s.

Whether you’re traveling into town from the east or west, the directions to downtown Gilboa are simple: Just take state Route 224 and turn at the bull.

Peter Diller has been using the 16-foot-tall fiberglass statue as a road marker since the 1970s. At the time, the Gilboa native’s parents and many other residents were championing a revival of the Putnam County town by welcoming visitors to its shops and restaurant.

A mascot wasn’t originally part of the plan, but when Diller’s father drove past a bull statue outside a bar in Toledo one day, he decided that he had to stop.

“He asked them if they wanted to sell it, and they did,” says Diller. He and his brother traveled to Toledo with a semi and forklift in tow to help their father bring the new purchase home. In typical bull fashion, the statue put up a bit of a fight on its way to Gilboa.

“Its head was so high that we had to jockey around every stoplight,” recalls Diller. “The first stoplight … we hit right on its forehead.”

Even after its installation, the bull had an unsteady adjustment period, enduring some large-scale cow tipping before it was eventually cemented into place. Since then, the bull has endured as a symbol of Gilboa’s own resilience as a town of just several hundred residents.

“We wanted something that represented the strength of the community,” says Diller, “and what [does that] more than a big, strong bull?”

The statue is located at the corner of state Route 224 and Pearl Street, Gilboa 45875.