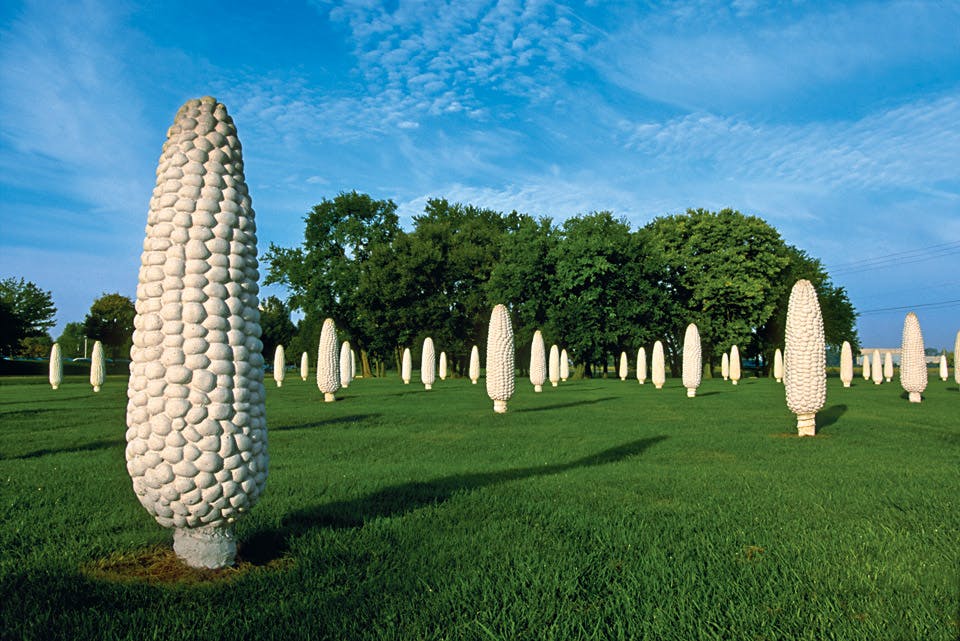 
Keep an eye out while driving along Rings Road in Dublin, and you’ll notice a curiously tall field of corn: 109 concrete ears, each at least six feet tall, stand on end in neat rows along the edge of a modern office park.

In 1993, the Dublin Arts Council commissioned Ohio artist Malcolm Cochran to develop what he refers to as “drive-by potential” for the site at the corner of Frantz and Rings roads. “I was really startled by the extent to which farmlands were being turned into developments,” Cochran says. “I decided to meet [the issue] head on.”

Inspired by Dublin’s agrarian roots, Cochran dug into the area’s history and discovered that the plot of land on which he’d be working once belonged to farmers Sam and Eulalia Frantz. He learned that the couple had worked with The Ohio State University to hybridize corn and that the line of trees at the rear of the property, which is now called Sam and Eulalia Frantz Park, may have had a role on the farm.

“The Osage orange tree was used to create hedges between fields both to be windbreaks and also to keep animals from getting in,” Cochran explains.

The artist built three prototype ears of corn, sculpting the kernels from wax before adhering them to giant Styrofoam cobs that were used to make molds. The Cook & Ingle Co. of Dalton, Georgia, then cast each approximately 1,500-pound ear in solid concrete.

Cochran says he arranged the sculptures in a way that mimics the lines of a well-groomed cornfield. “I see it as a memorial,” he says.