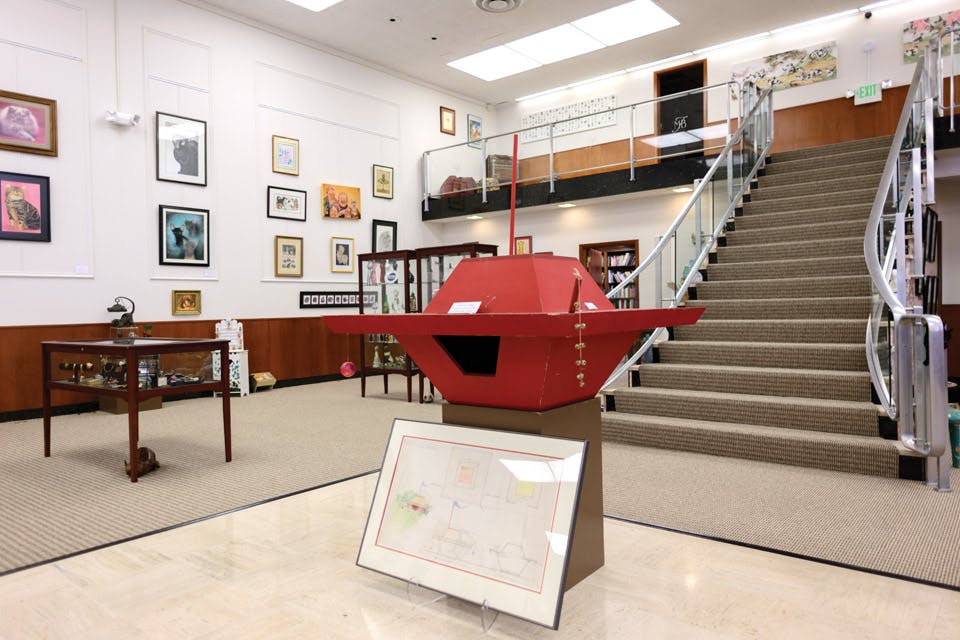 The unusual abode has a flat roof for sunbathing, a flagpole and a few toys dangling from its eaves. Although legendary architect Frank Lloyd Wright’s firm is credited with designing the structure, the home’s resident couldn’t have cared less. In his defense, Felinus Tonkens was a cat.

“It’s an outdoor piece. It’s not a litter pan. It was more like a home for the cat to get out of the elements,” explains Karen Lawrence, manager of the Feline Historical Museum in Alliance, where the high-end cat condo is on display. The whimsical detail was added to Frank Lloyd Wright’s Gerald Tonkens house in Cincinnati, after the home’s owner requested a residence be created for the family pet.

The 4-foot-square piece is heavy, built with solid wood and painted in a bright Cherokee red. The angular, space-age-looking structure features a string of bells hanging from one corner and a colorful ball from another.

“[Domino’s Pizza founder Thomas Monaghan] was a huge collector of Frank Lloyd Wright pieces, and this was part of his collection,” Lawrence says. “When we were offered the opportunity to buy it, we said, ‘Oh yeah!’ It fits right in.”

The house is displayed prominently at the bottom of a wide staircase at the Feline Historical Museum alongside the original designs for the structure, which were drawn by Wright’s apprentice, Thomas Olson. The 5,000-square-foot museum, which opened in 2011, is managed by the Cat Fanciers’ Association and is housed at the organization’s headquarters.

In addition to walls lined with feline-related artwork, the museum houses a 6,000-volume library of related books and “Best Cat” awards dating back to the 1880s. “We have a silver collar that was awarded to Best Cat in New York in 1895,” Lawrence says. “We’ve got some really neat pieces.”