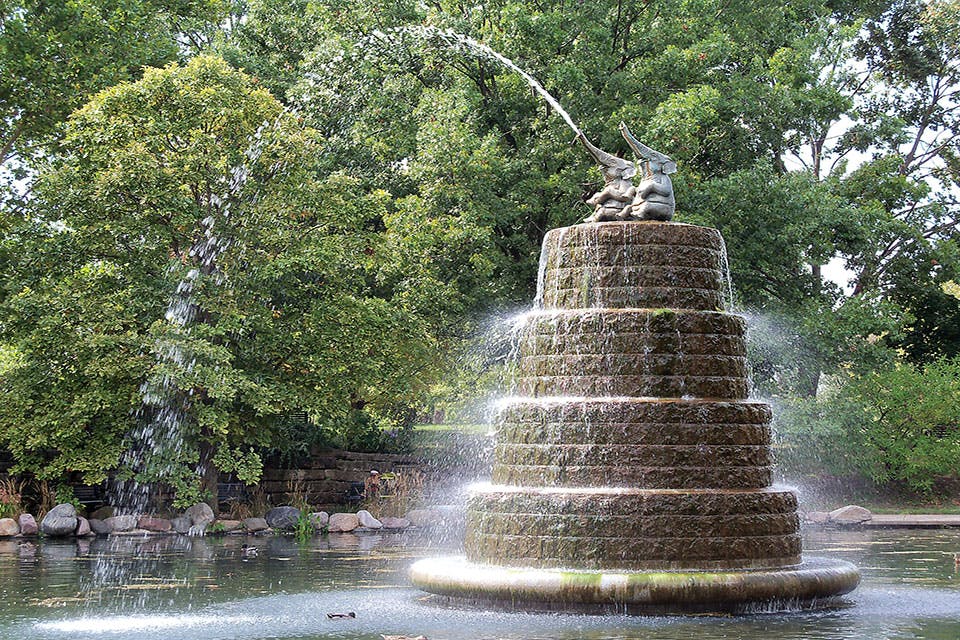 This whimsical landmark is not far from the Sells family “circus” mansion and offers a nod to the history of the area.

May 2020
BY Frances Killea | Photo by Ken Scott

May 2020
BY Frances Killea | Photo by Ken Scott

Goodale Park fills a slice of land between Columbus’ busy Short North Arts District and its picturesque Victorian Village, offering a 32-acre oasis that’s home to basketball courts, a playground, a picnic shelter and walking paths. There are sculpted gardens, a gazebo and a fountain that rises from a small pond like a four-tiered cake. Two cast-bronze elephants sit atop it, shooting water from their trunks. It’s a whimsical design but one that also serves as a nod to the history of the area.

“There’s always been a fountain in Goodale Park,” says Jason Kentner, president of Friends of Goodale Park, an organization that supports the 1851 landmark. “You would see photographs of the fountain. It was this kind of tall but very irregular, almost naturalist stone pile that cascaded.”

When that fountain fell into disrepair, the city removed it and replaced it with a simple device that served only to aerate the water. It wasn’t until the early 2000s that Friends of Goodale Park, which was founded in 1987, decided it was time to bring back a grander fountain and issued a call for designs.

Ohio artist Malcolm Cochran — the man behind the “Field of Corn” in the Columbus suburb of Dublin’s Frantz Park — won the competition and subsequently worked with contractors and the city to build the fountain, which was dedicated in 2013.

“In terms of the iconography of it, the multi-tier [design] is just a thing with cascading fountains,” Kentner explains. “But the elephants are actually a reference to the Sells Family Circus, which was a circus that was owned locally in Columbus.”

Just around the corner from the park is the Sells Mansion, which locals commonly refer to as “the circus house.” Circus elephants have also made their own impression on Goodale Park over the years, according to Kentner.

“When the circus would come to town, they would typically bring the animals into the train yard, and then parade them through town,” he says. “Goodale Park was always on the route.”