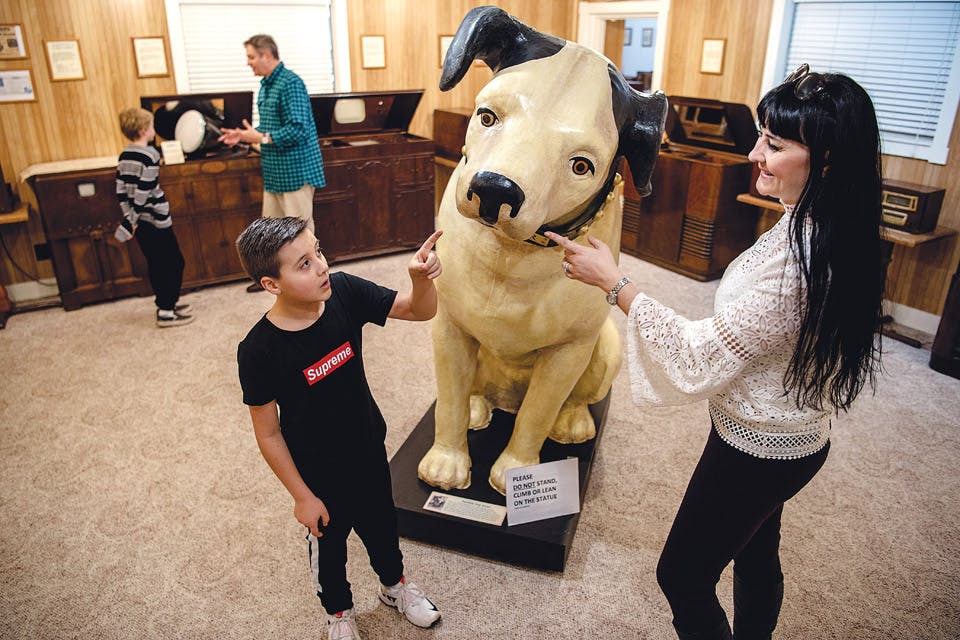 Vintage televisions and memorabilia such as this statue of RCA’s Nipper mascot are part of the fun in Hilliard.

May 2019
BY Frances Killea | Photo by Wendy Pramik

May 2019
BY Frances Killea | Photo by Wendy Pramik

Some look like portholes from a ship’s cabin. Others resemble washing machines, jukeboxes, microwaves, wooden boxes or metallic droids with screen-like faces. Together, they fill the nearly 7,000 square feet of exhibit space at Hilliard’s Early Television Museum, a culmination of Steve McVoy’s lifetime of love for the TV.

“There’s a picture of me when I was 10 years old pulling a Red Flyer wagon with a sign on the side that said ‘television service,’ ” he recalls.

Instead of watching TV after school, he picked up hours at a local television repair shop, setting his course for what would be more than 30 years in the cable industry. After selling his business in 1999, collecting antique sets filled that void.

“They always fascinated me because they were so big and heavy and complicated, compared to later technology,” he says.

McVoy’s collection began with an eBay find from 1939. When he won it, the people he’d outbid quickly got in touch.

“There were maybe 10 significant collectors, and they all contacted me,” he recalls. “They said, ‘hey, who are you?’ ”

In the following years, McVoy continued acquiring old televisions and spent time visiting the collectors he met via that first purchase. In time, his own collection began to outgrow his home. But that wasn’t the only impetus for opening a museum.

“There are museums where you could go watch the programming from the beginning of television,” he says. “But there are none in the country that specialize in the hardware.”

So, in 2001, McVoy bought a building where he could show off his collection and organized it according to era: mechanical televisions, pre- and post-World War II sets and early color incarnations. Each room has a placard with information about the time period, and each set has a card denoting its original price, along with that year’s average wages and cost of a gallon of gasoline. About 20 of the sets play classic programming.

McVoy is hesitant to pick favorites from his collection of over 150 sets (although he is partial to a 1938 British edition with a built-in phonograph and wood veneer). He takes most pleasure marveling at the advancements in technology over time.

“I had this image that engineers are a lot smarter nowadays,” he says, but admits he’s changed his mind. “Today we have so many tools, and back then it was so limited, and yet they figured out ways of doing things.”