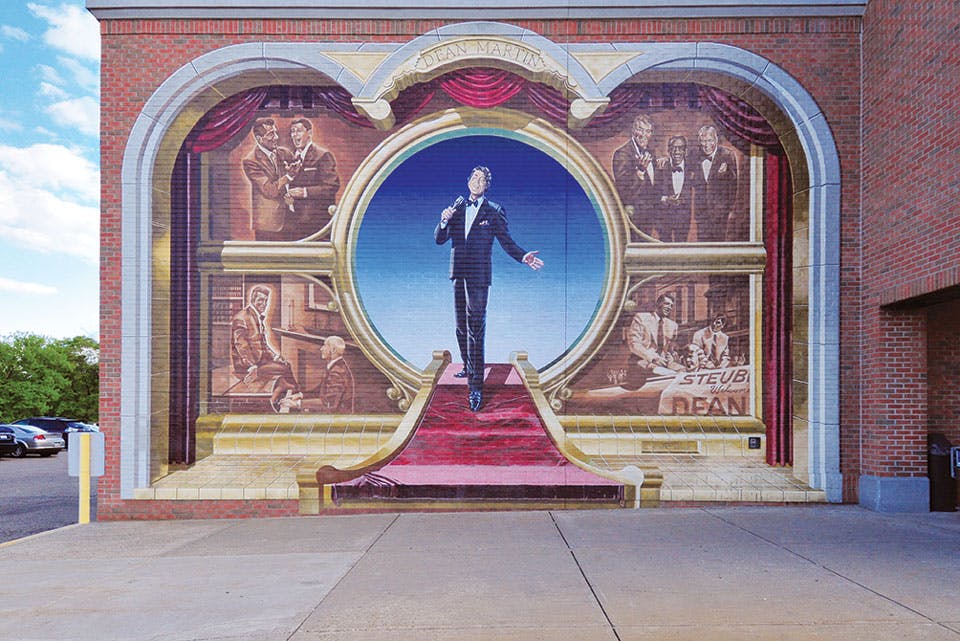 The entertainer, Rat Pack member and native son of Steubenville is immortalized in a mural that recalls scenes from his life and career.

Many people know Dean Martin from the Rat Pack — the famed group of entertainers from the 1950s and ’60s that included Joey Bishop and Frank Sinatra. Others instantly recognize Martin’s rich baritone from his famous song “That’s Amore.” But what many may not realize is he was born in Steubenville in 1917.

Martin, formerly known as Dino Crocetti, grew up the son of Italian immigrants, working for a time in a steel mill and then making a go as a boxer before becoming a singer. During his later teens, Martin’s performances in local clubs led him to Cleveland and, ultimately, out west to find fame. But he was never forgotten by his hometown.

In 1997, artist Robert Dever spent seven weeks painting a large Dean Martin mural on the side of the Kroger grocery store in town. There’s a main image of Martin in the middle holding a microphone and singing, while four other panels depict different eras of his life.

“One of the segments is his time with Jerry Lewis,” says Judy Bratten, executive director of historic Fort Steuben and the Steubenville Visitor Center. “Another part is his longtime television show. Then there’s a section with the Rat Pack.”

The fourth panel depicts Martin’s return to Steubenville, joined by his wife and Jerry Lewis. “They came back in 1950 and there was a big parade,” says Bratten.

Ever since Martin’s death in 1995, Steubenville has honored him with an annual festival, usually set in June. Fans visit to listen to tribute concerts, compete in singing contests and meet Martin’s daughter, Deana Martin, who is also an entertainer. There are plenty of film clips from Martin’s many TV and film performances, and Bratten loves to see older generations introduce their children and grandchildren to him.

“These kids have never seen Jerry Lewis or Dean Martin,” she says. “To hear the peals of laughter — it’s just delightful … rediscovering a truly good talent.”