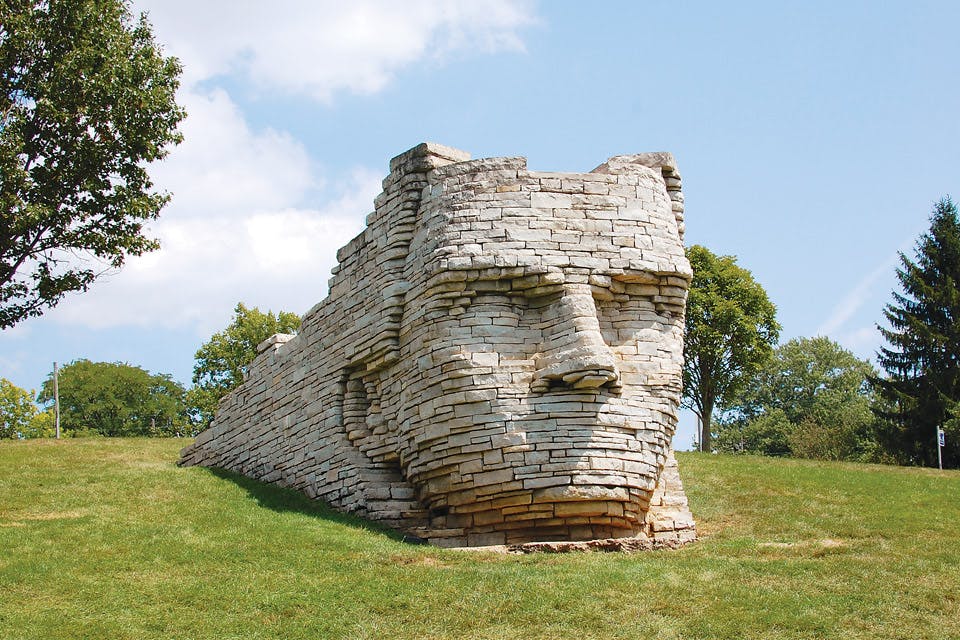 His face wears a stoic expression of utmost focus as he stares out across the hillside and river below. Since 1990, Dublin’s Scioto Park has been under the watchful gaze of Chief Leatherlips: a 12-foot-tall, stacked-stone depiction of the Wyandot leader who called central Ohio home.

“He was a particularly fascinating individual, the way he was bridging Native American cultures within the tribes and also between the tribes and white settlers,” says Ralph Helmick, the Massachusetts-based sculpture artist who designed the memorial. “The inevitable march west was at full flow during his lifetime.”

Despite his call for peace and his efforts toward achieving it, Chief Leatherlips was executed at the hands of a fellow tribesman just north of what is now Scioto Park in the early 19th century. In 1988, the Dublin Arts Council held a commissioning process to design a memorial to Chief Leatherlips. Helmick was awarded the job with a design that plays on the artist’s penchant for creating public art that goes beyond mere aesthetic appeal.

“One interest of mine is occasionally making a sculpture that is also a place — something you can enter, or physically interact with,” Helmick says, adding that visitors can stand atop the chief’s head to look out over the Scioto River Valley.

Working from two hand-built models, Helmick and a team of three local stonemasons constructed the piece from slabs of limestone set atop a concrete foundation and secured with wire mesh and mortar. The entire process took two months to complete, and the sculpture was dedicated in 1990 with a ceremony attended by members of several of Ohio’s Native American tribes.

“They used that dedication of the Leatherlips monument as an opportunity to reconcile longstanding Native American tribal differences,” says Helmick. “Several tribes showed up and they had a peace pipe ceremony.”