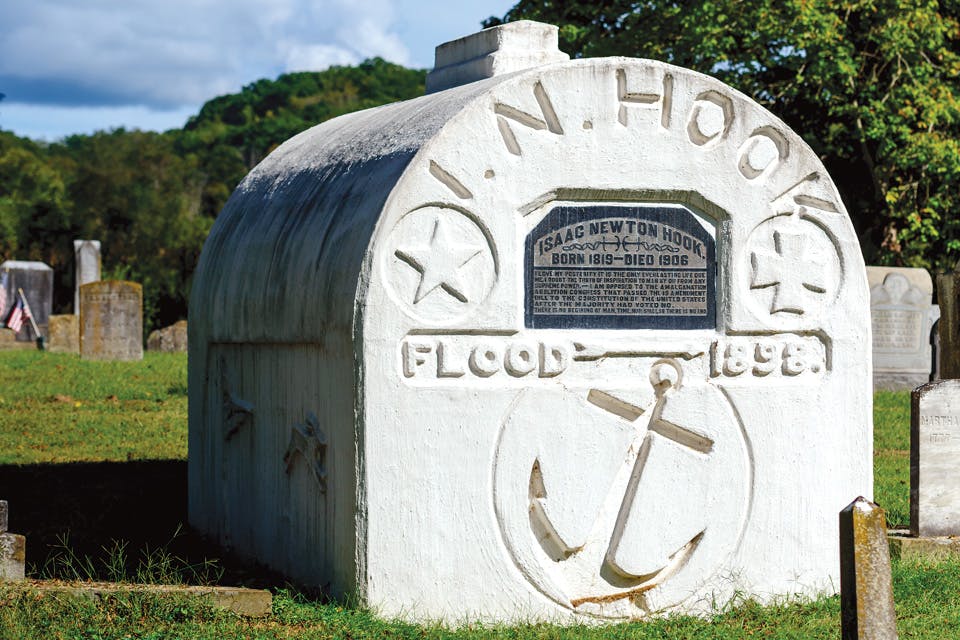 Isaac Newton Hook was a well-known 19th-century boatman on the Muskingum River. He also designed and created his own tomb.

Captain Hook rests inside a domed, ivory-colored tomb etched with an anchor, but he wasn’t the swashbuckling, unscrupulous pirate of storybook lore. Stockport’s Isaac Newton Hook was a well-known 19th-century boatman who began plying his trade as a teen and spent his entire adult life along the Muskingum River as a ship captain and boat builder.

Hook’s engineering savvy carried him from project to project, right to the end of his life, when he built his own tomb.

“The cemetery where his tomb is was on the other side of the river,” Hanson explains. “He would go up in his horse and buggy to a canoe, get in the canoe and row across the river and work on his tomb. Almost as soon as he got done constructing it was when he expired.”

Unlike a simple grave marker, the monument features a domed top (in part, legend says, to keep Hook’s wife from dancing on his grave) and was fashioned with specific carvings on each side: On one, a man in a canoe; on another, a pioneer with an ax in hand and a dog at his side. And, along the front, the word “flood” marks an important waterline.

“He did not want to be buried where water would run over the top of him,” Hanson says. “So, he had the flood level of 1898 inscribed right on his tomb, and the shape where a coffin would go is cut out right above it. He was slid in right above the waterline.

“He had it all figured out,” Hanson adds with a laugh, “[but] he was mistaken, because in 1913, the flood came down over the top of his tomb and took out the church that was there.”