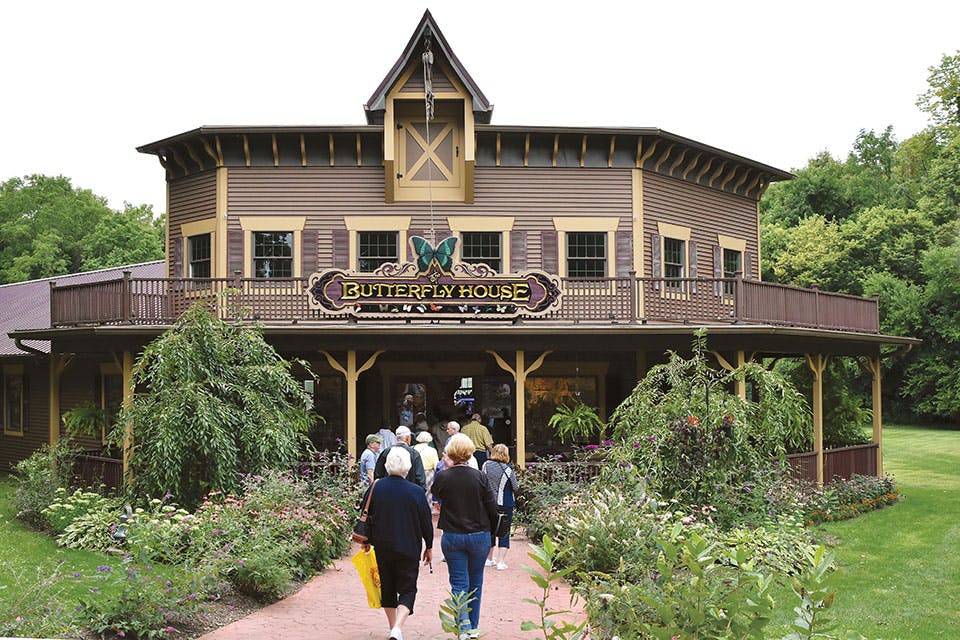 From May until mid-October, a multitude of butterflies float through this 4,000-square-foot attraction on South Bass Island.

Green Malachite, Red Mormon, Giant Swallowtail — they’re just a few of the more than 50 species that brighten up Put-in-Bay’s Butterfly House with flashes of green, bursts of red and streaks of yellow each summer. The attraction opened in 2004, five years after Dee Dee Duggan and her family bought Perry’s Cave, which Battle of Lake Erie hero Commodore Oliver Hazard Perry is credited with discovering in 1813.

“We were trying to think of another family nature attraction that would go alongside a cave,” Duggan says. “My mom and dad had traveled a little bit around the U.S. and had gone to a few butterfly houses, and my dad suggested that we try that.”

The Duggans import species, most of which are native to Malaysia and South America. From May through mid-October, the beautiful insects float through a 4,000-square-foot space filled with tropical plants that they’re drawn to in the wild.

“They don’t have a mouth and a jaw like humans do. They have what’s called a proboscis,” Duggan explains. “It’s a straw-like tongue, and they will drink the nectar from the plants like a hummingbird or a bee. We have benches in there and little trails through the bigger, thicker plant beds, so you can get right up-close and see them drinking the nectar.”

Butterflies arrive in the chrysalis stage and are released into the greenhouse when they’ve emerged. Duggan and her family have their supplier ship a variety every week during the summer, and the mix is mesmerizing.

Swallowtails are a hit, too, as are the unusual Owl Butterflies.

“Their markings on their outer wings look like a big eyeball … so when their wings are opened up, it looks like the face of an owl flying toward you,” Duggan says.

She adds that visitors frequently find joy and even romance in the Butterfly House. Others find comfort in the presence of such beautiful creatures after the loss of a loved one.

“A lot of people affiliate butterflies with … flying off to heaven,” she says. “It gets really emotional in there sometimes for people.”