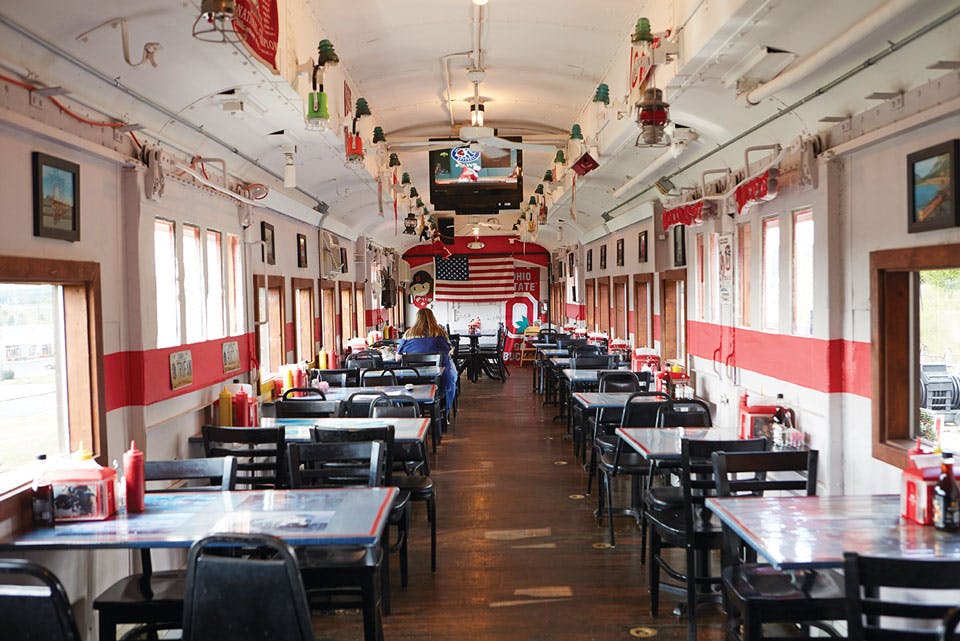 This train car has been reinvented as a casual dining spot that pays tribute to all things scarlet and gray.


You don’t need a ticket to hop on the Buckeye Express. The only boarding pass required is a robust appetite.

“I’m a burger guy,” says owner Tony Morris, who relocated his family restaurant from Mansfield eight years ago. “We have our own seasoning we put on them, which my son developed ... [we have] fresh-cut fries all the time.”

The classic, hearty diner fare is solid too, but it’s the restaurant’s location in a steam engine, diner car and caboose set high on a hill overlooking Interstate 71 that makes the biggest impression.

Towed from Roanoke, Virginia, in 2008, the train is flanked by nearly life-size statues that give the whole scene the feel of a John Wayne flick. An American Indian riding a horse near a tepee down the hill from the train frequently draws curious diners before and after meals.

“We have a cowboy and a steer [statue] out back,” adds Morris. “[Property owner Terry Byrne] wanted to have a Western look with the old locomotive.”

Inside, the train cars are a tribute to the scarlet and gray, adorned with Ohio State Buckeyes memorabilia as well as railroad signal lights and signs.

“I had a gentleman walk in the front door one day,” says Morris. “I’d never seen him before. And he says, ‘This’ll look much better here than in my garage,’ and he gave me an actual coal shovel from a train.”