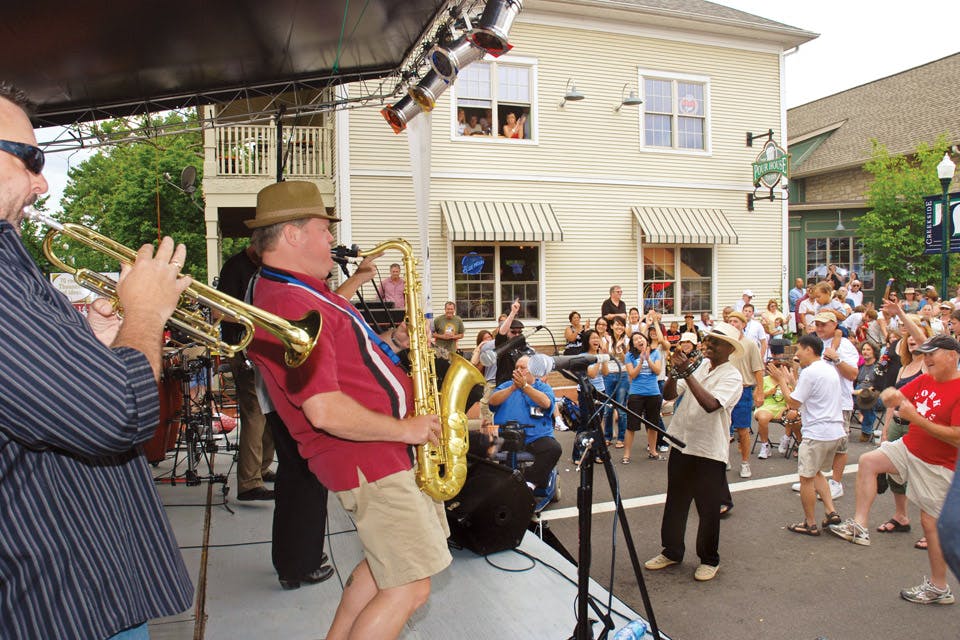 We recognize our Best Hometowns 2013-2014 by spotlighting some of the discoveries made during our visits.

Music Fest
With 50 bands on five stages, it’s no wonder 40,000 music lovers flock to the Creekside Blues & Jazz Festival each June (this year’s is set for June 20–22). But there’s also cuisine from central Ohio chefs and a Musical Discovery Zone, where kids are free to beat bongos and toot horns. “We offer a family-friendly event in a picturesque setting,” explains Laurie Jadwin, executive director of the Gahanna Convention & Visitors Bureau. “It’s a festival where people renew acquaintances from the year before and make new friends.” Creekside Park, 117 Mill St., 614/418-9114, creeksidebluesandjazz.com

Chocolate Shop
No matter what your pleasure, be it peanut butter, cappuccino, red velvet or even bubblegum, The Chocolate Tree has oodles of fudge for every palate. Shop owner Sally Held estimates that she’s sold more than 800 pounds of the sweet stuff since the store opened a year and a half ago. In addition to the 32 fudge flavors her customers clamor for, Held also carries an assortment of cookies, cobblers, pies and custom-made cakes. Go ahead and indulge. As Held says, “Chocolate is nature’s way of making up for Mondays.” 81 Mill St., 614/373-0100

Botanicals Boutique
Stresses melt away amid the scents of lemongrass, peppermint, sweet orange and other soothing elements found in the soaps, scrubs, lotions and soy candles sold at Honey Grove Botanicals Bath & Candle Boutique. Barbara Drobnick, a certified aromatherapist, makes her products by hand, using beeswax from local apiarists and milk from Ohio farmers. “After people have been in the store for a while, many of them tell me this is the most relaxed they’ve felt all day,” she says. 121 Mill St., Suite 126, 614/638-7809, honeygrovebotanicals.com

Goetta
The Paxton name is virtually synonymous with Loveland; in fact, part of the town was once known as Paxton, named for Col. Thomas Paxton who first settled the area. The restaurant that now bears the colonel’s last name, Paxton’s Grill, serves up a solid Cincinnati cuisine staple — goetta, a meat dish containing pork and pinhead (or steel-cut) oats. A must-try for any visitor, order a goetta sandwich on toasted rye ($7.59) or a German omelet with goetta, onions and Swiss cheese ($7.79). 126 W. Loveland Ave., 513/583-1717, paxtonsgrill.com 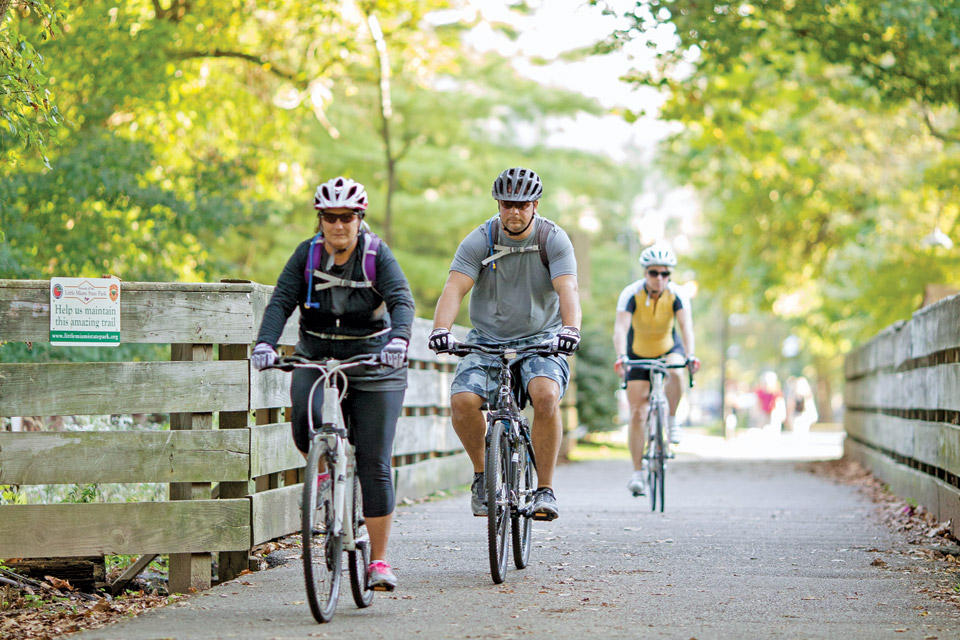 Bike Trail
Even though the Little Miami Scenic Trail stretches 75 miles from Springfield to Newtown, the portion of it that cuts through Loveland is a hub of activity. The trail follows the former path of the Little Miami Railroad, running parallel to the Little Miami River. Bring your own bike or rent one. “People from all over the country come to ride the trail just for the scenic views,” says Montgomery Cyclery assistant manager Joe Ferrara. miamivalleytrails.org

Replica Castle
Loveland eccentric Harry Andrews built and lived in this replica of a medieval castle for more than 50 years. He dragged rocks from the Little Miami River and made bricks by pouring concrete into empty milk containers. Although the place’s official name is Chateau Laroche, most people call it the Loveland Castle. Andrew was still working on it when he died in 1981 at the age of 91. Visitors can now explore the castle, which includes  four towers and a dungeon, for $3. 12025 Shore Rd., 513-683-4686, lovelandcastle.com

Community Theater
When Aurora Community Theatre’s 2013–2014 season continues this month with “The Diary of Anne Frank” (“Fiddler on the Roof” follows in April), it’ll be in a space that underwent a nearly $200,000 renovation just four years ago, offering improved seats and more legroom. (The theater, which was founded in 1959, moved into its home at Aurora’s Performing Arts Center in 1971.) “Our semi-round amphitheater set-up is different from other community theaters,” says theater president Marianne Paul. “The audience surrounds the actual stage, making it a much more intimate connection with what is going on.” 115 E. Pioneer Trail, 330/562-1818, auroracommunitytheatre.com

Memory Jogger
Generations of northeast Ohioans have fond memories of Geauga Lake. A visit to the Aurora Historical Society Museum and Archives will soon remind you of the first time you faced down the amusement park’s iconic roller coaster. This spring, the turnstile that guests passed through on their way to the Big Dipper will be installed in the lobby. An updated exhibit featuring archival materials from the park is on its way, too. “We are planning to update our Geauga Lake park exhibit in the near future,” says Marcelle R. Wilson, the society’s director, “as well as publish a book.” 115 E. Pioneer Trail, 330/995-3336, aurorahistorical.org

Short Ribs
Tuesday is officially Rib Night at Mad Jack’s Grill & Pub, but they’re available every day of the week and for good reason. “Our signature dish is slow-braised short ribs with a black vinegar sauce,” explains proprietor John Updyke. “Slow-cooked for seven hours, the ribs melt in your mouth.” We won’t blame you if the other weeknight specials, such as Wednesday’s meatloaf dish or Friday’s fish fry, steal your affections. And no matter what you order, you can wash it down with a local brew from the likes of Cleveland’s Indigo Imp or Akron’s Thirsty Dog Brewing Co. 204 S. Chillicothe Rd., 330/348-0058, madjackspub.com

Antique Mall
With more than 100 dealers selling antique merchandise ranging from glassware to furniture to vinyl records, the Logan Antique Mall feels like a carefully curated and tidy attic. The mall opened in 1995, but you’ll find items dating back to the 1800s as you explore. Six employees staff the 10,000-square-foot space, and they’re the first to tell you that if you see something you like, don’t wait. It may not be there long. “[Dealers] bring in items daily,” says Eleanor Bowley who became the mall’s manager in July, “and sometimes we don’t even see them before they sell.” 2795 St. Rte. 664 S., 740/385-2061, loganantiquemall.net

Retro Imports
The Columbus Washboard Co. is known for being the last washboard maker in the United States, but you’ll also find a few items from across the pond while browsing its factory store. Thanks to a reciprocal agreement with its UK distribution center, the washboard maker also sells revived European soap brands such as Vinolia, which was given to first-class passengers on the Titanic, and Lifebuoy. “People 50 and above will remember [Lifebuoy],” says factory manager James Martin. “There would have been a bar of that in probably every single household in the U.S. up until the ’60s and ’70s.” Columbus Washboard Co., 14 Gallagher Ave., 740/380-3828, columbuswashboard.com 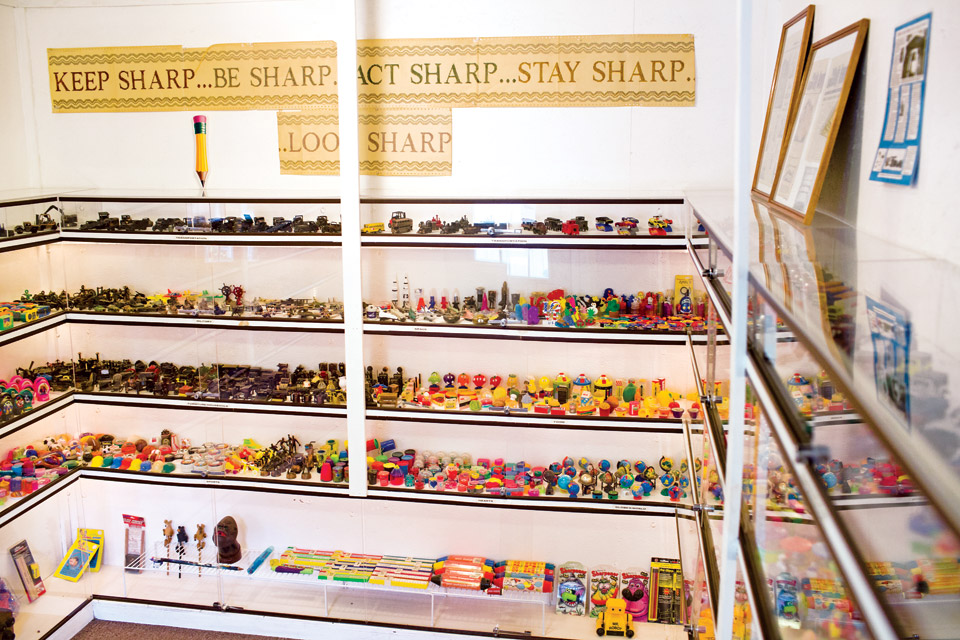 Micro Museum
It’s quirky, it’s fun and it all fits in a wooden backyard shed. A collection of more than 3,400 unique pencil sharpeners line the shelves inside the Paul A. Johnson Pencil Sharpener Museum, located at the Hocking Hills Welcome Center. The shed was originally located in the side yard of Johnson’s home in Nelsonville. His wife loaned the museum to the welcome center following his death so more people could enjoy it. “We packed it all up in order,” says Susie McKinnon, director of operations for the Hocking Hills Tourism Association. “We made sure it was organized the way he intended.” 13178 St. Rte. 664 S., 740/385-2750, explorehockinghills.com

Quirky B&B
Ready to spend a weekend behind bars? Of course you are when it’s in The Old Vermilion Jailhouse Bed & Breakfast. The 79-year-old former jail is the place to steal time away with your significant other. Cells are decorated with Tiffany lamps and stained glass. “People love, love, love it,” says owner Markos Paradissis. “Where else can you stay in jail without being arrested?” 691 Grand St., 440/963-5245, jailbed.com

Boat Trip
You can opt for a three-hour tour or a day exploring Vermilion Harbor. Moes Marine Service will chart the course, no matter what floats your boat. Their 10-passenger Duffy Electric Boats are designed especially for landlubbers. Climb aboard, and let the cares of the day drift away. You can even serve as captain of the ship if you’d like. “Since they are 6 horsepower, anyone can drive them,” says co-owner Mike Moes. “It’s a great way for people unfamiliar with the water to get access to it.” 5336 Liberty Ave., 440/967-4221, moesmarineservice.com

Movie-house Gallery
Artist Sherry Bradshaw embraces the flotsam and jetsam of life. The co-owner of the Artseen Gallery collects driftwood and other objects she finds along the Lake Erie shoreline and creates installations to make statements on subjects including war and pollution. Emerging artists are also showcased in her space, housed in a former 1930s movie house. “The gallery is very contemporary,” Bradshaw says. “People tell me I belong in New York City.” 5591 Liberty Ave., 440/963-0611, theartseengallery.com