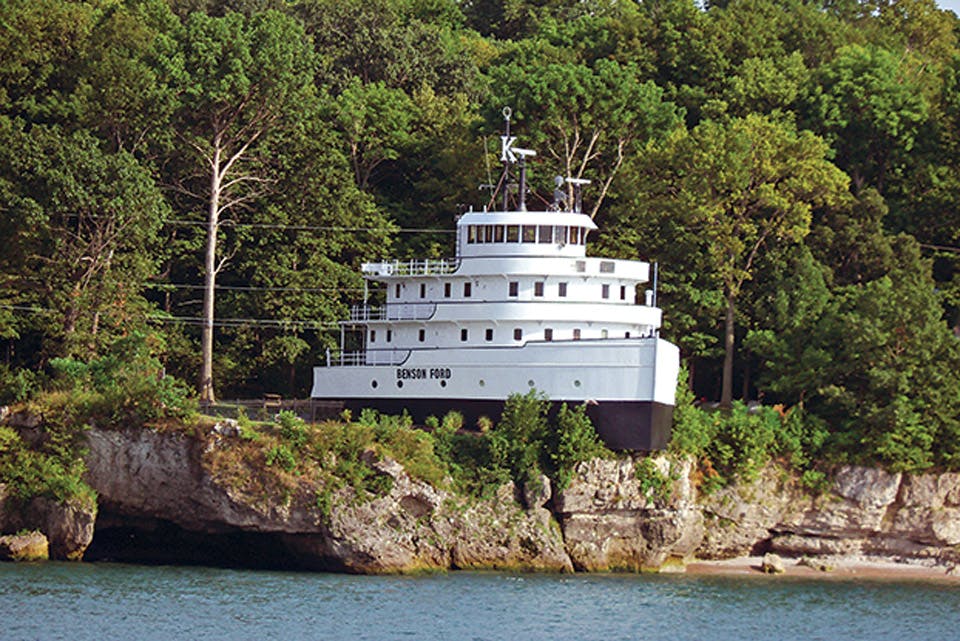 This historic shipping vessel has a new life, towering over the rocky shoreline of South Bass Island.

After more than 50 years of hauling iron ore across the Great Lakes, the Benson Ford has permanently run aground in Put-in-Bay — its front deck perched atop a 30-foot bluff on the western shore of South Bass Island.

It was put there by Frank Sullivan, who purchased the freighter following its long career of shuttling materials for the Ford Motor Co. to and from ports in Ohio, Michigan and Canada. Renamed the John Dykstra II after it was decommissioned in 1981, the 612-foot vessel spent the early ’80s in the Cuyahoga River while Sullivan decided what to do with it.

Ultimately, he chose to turn the front deck into a home, paying to have it removed and installed at Put-in-Bay. “There are some challenges [to] retrofitting a 1924 ore freighter into a home,” says Bryan Kasper. He and his father won ownership of the 7,000-square-foot residence in a 1999 auction. “It’s a steel bunker. If there was ever a zombie apocalypse, that’s where you’d want to go.”

Sullivan hooked up plumbing and electricity for the six-bedroom, four-level home in the 1980s, and Kasper has been careful to maintain much of the ship’s original details, from built-in dressers and daybeds to windows and shutters. But he also made a few renovations of his own, such as converting the ship’s lower deck into a casual lounge. “You needed a place that didn’t look like a museum,” he says with a laugh, “so that if you dropped your beer on the floor, you felt like you could.”

Kasper says his favorite spot in the home is the ship’s pilothouse. “The sun sets right in front of you,” he says. “You’re probably 75 feet off the water, and you just get a staggering view.”