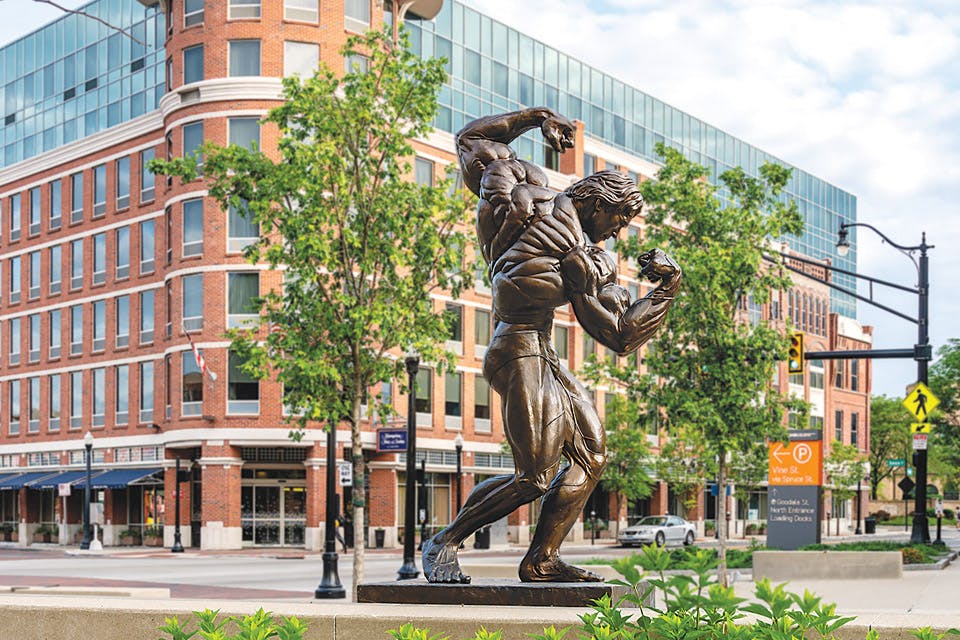 The tribute to the iconic strongman stands outside the Greater Columbus Convention Center.

For those not closely associated with the world of rippling muscles, Arnold Schwarzenegger is best known as the actor who brought The Terminator to life and laid waste to the Predator on the big screen during the 1980s before being elected governor of California in 2003.

But the Austria-born bodybuilder was a five-time Mr. Universe and seven-time Mr. Olympia. He also has ties to Ohio so strong that his likeness is cast in bronze outside the Greater Columbus Convention Center. The statue stands with his arms curled, flexing for all the passersby on High Street to see.

In 1970, Schwarzenegger himself posed for Columbus crowds as he competed in and won that year’s Mr. World competition, held at the Franklin County Veterans Memorial Auditorium. He struck up a friendship with the event’s organizer, Jim Lorimer, and together they created the Arnold Sports Festival in 1989. Hosted annually in Columbus to this day, it is the world’s largest multisport festival.

But it was a magazine cover from a decade earlier that led to Schwarzenegger’s likeness being immortalized in Columbus. In 1979, a bust of professional body builder Joe Weider created by then-California-based sculptor Ralph Crawford appeared on the cover of Weider’s magazine, Muscle Builder.

“Arnold saw it and wanted to know how to get a hold of me,” Crawford recalls.

Schwarzenegger later commissioned the artist to create a small statue in his image to give out as prizes at the Arnold Classic, the bodybuilding competition that serves as the cornerstone of the Arnold Sports Festival. The two men remained in touch, and in 2011, Schwarzenegger reached out for another sculpture, only this one with grander proportions.

“That was about an 8-foot one, with a 12-inch base,” Crawford says, adding that one casting is housed at a museum dedicated to Schwarzenegger in Graz, Austria. Another ended up in Ohio, a 600-pound gift from Dr. Robert Goldman to honor Schwarzenegger and represent the city’s significance in the sport of bodybuilding. Originally installed outside Franklin County Veterans Memorial Auditorium in 2012, the sculpture was rededicated in 2014 when it was moved to its current home outside the convention center.

“We named that piece, the 8-foot statue, ‘The Arnold Classic,’ ” says Crawford. “He basically owned that pose. … It was a fantastic, very artistic pose. I knew it would be fun to do.”