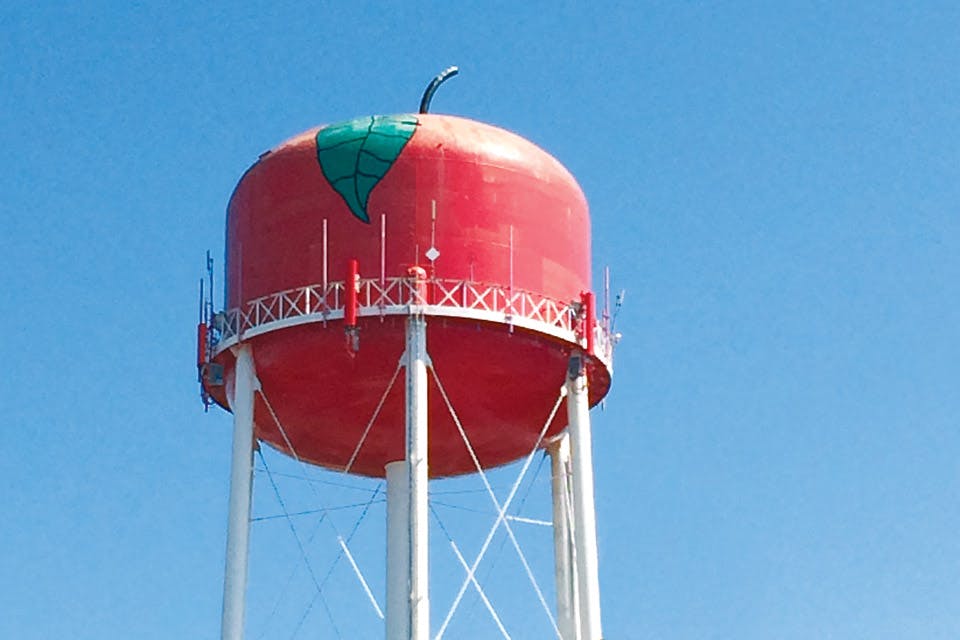 This community of 6,500 in the Appalachian foothills of Jackson County honors its agricultural heritage with a can’t-miss landmark.

May 2018
BY Frances Killea | Photo by Lisa Rickey

May 2018
BY Frances Killea | Photo by Lisa Rickey

Some places have statues. Others pay tribute to local history with murals. But in the town of Jackson, a small community of 6,500 in the Appalachian foothills of Jackson County, the most well known local landmark is difficult to miss.

Just a block from the town’s main intersection, a water tower rises high into the air — its tank painted a glossy red with a single green leaf on three sides and a brown stem arching skyward.

The oversize apple was first painted in 1957 as a tribute to Jackson’s rich agricultural heritage. It also serves as a year-round reminder of the Jackson Apple Festival, which is held in the center of town each third full week in September and dates back to 1937.

“We had 40 apple orchards when the Apple Festival was started,” says Randy Heath, Jackson’s mayor since 2008 and a lifelong resident. Only one remains in the area today, he adds, before noting that it will be shuttered by early summer.

The Jackson Apple Festival, on the other hand, shows no signs of slowing down. Roads in town are closed to allow exhibitors and live music to fill the streets, and the celebration culminates with a weekend parade.

“On Saturday night, we have the largest lighted parade in the state of Ohio,” says Heath, adding that crowds of up to 60,000 people have gathered during past festivals. “We have had the Ohio State University full marching band in it before.”

It’s a pretty big deal, or, as Heath says, “In Jackson, we have 51 weeks in the year, and then we have the Apple Festival.”

The painting of the water tower is a reminder but also a clever visual trick that gets noticed.

“We’ve had people who’ve flown over Jackson in airplanes and say they’ve seen the apple water tower,” says Heath. “It really is a signature.”