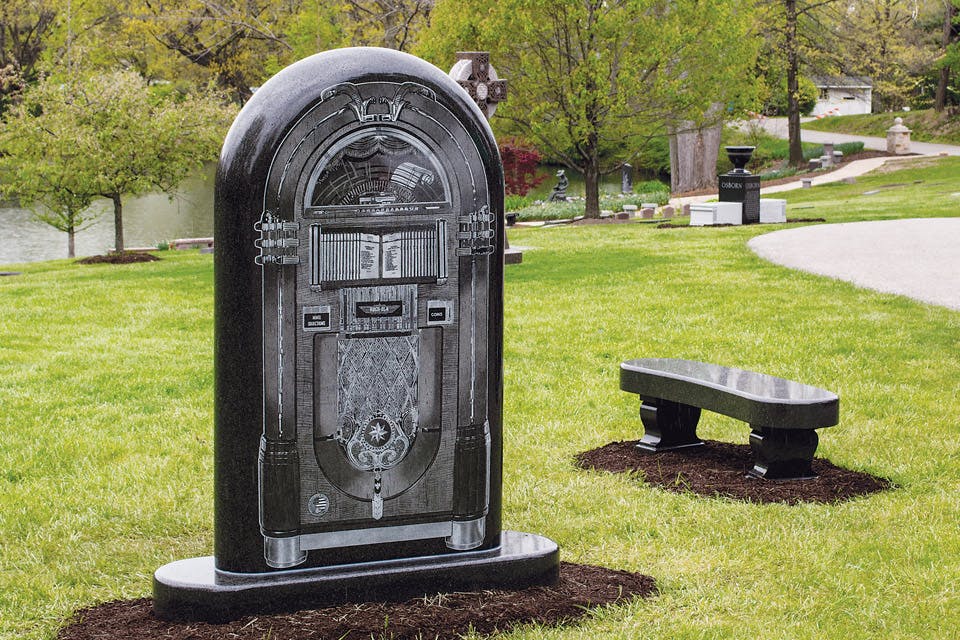 A jukebox-shaped headstone at Lake View Cemetery marks the grave of the man who popularized rock ’n’ roll.

From Devo and The O’Jays to Nine Inch Nails and The Black Keys, Ohio tops the charts when it comes to rock ’n’ roll pedigree. Consider that Cleveland also helped launch legends ranging from David Bowie to Bruce Springsteen, and it’s easy to see why the shrine to the 20th century’s most revolutionary musical innovation was built along the Lake Erie shore.

But just a 15-minute drive from the Rock & Roll Hall of Fame, you’ll find the final resting place of the man credited with popularizing the term “rock ’n’ roll” during the 1950s: Alan Freed.

“He was one of the top disc jockeys on the radio,” explains Katharine Goss, president and CEO of Lake View Cemetery.

Freed’s family moved to Ohio when he was a boy. After studying broadcasting, he landed at Cleveland radio station WJW in 1950, spinning rhythm and blues records on the air to an audience who loved the boisterous and energetic music.

Freed also threw what is now considered the first rock ’n’ roll concert: the Moondog Coronation Ball. The event, which was held in Cleveland on March 21, 1952, had to be cut short after large crowds led local authorities to shut the event down.

Freed was cremated following his death in 1965 at age 43, and his urn was interred in California and New York before being displayed at the Rock & Roll Hall of Fame for 12 years. Then his son, Lance, called Goss to see if Lake View Cemetery, home to the graves of President James A. Garfield and oil tycoon John D. Rockefeller, would host his father for eternity.

Since 2016, a jukebox-shaped headstone has marked Freed’s grave, serving as a permanent tribute not only to the music he popularized but how it changed American culture.

“It was a little edgy, avant-garde, but it seemed to be the right time for it in our history,” Goss says of how rock ’n’ roll began to melt racial barriers. “There was this music that was bringing people together.”