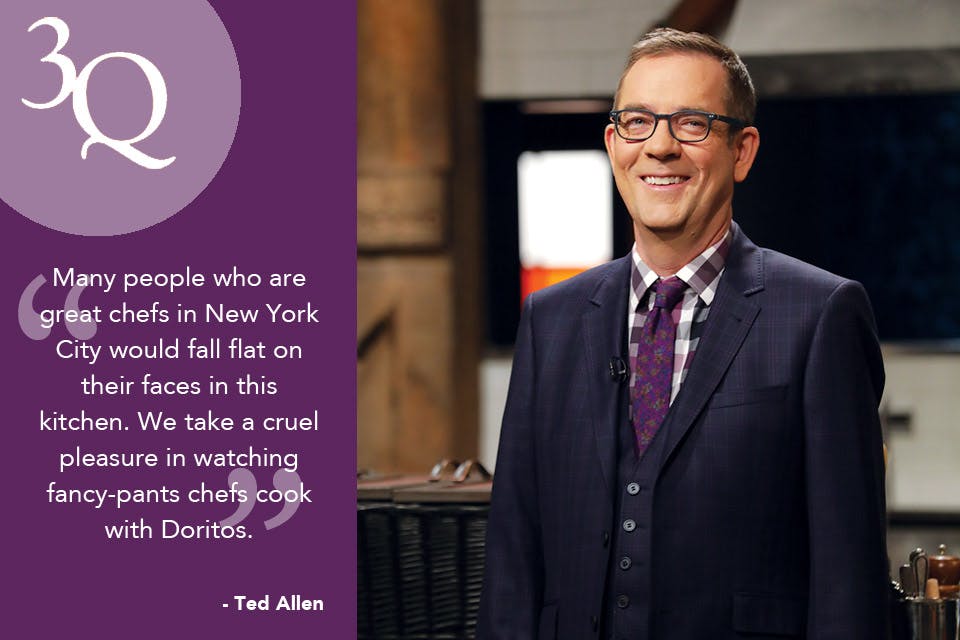 When “Chopped” debuted on the Food Network back in 2009, it had three essential ingredients: cooks who improvised on a strict timetable, judges who weren’t afraid to tell them when they flopped and a host who kept the pot stirred.

“I don’t consider ‘Chopped’ a reality show,” says Columbus native Ted Allen, who has hosted more than 320 episodes of the popular program. “It’s a culinary competition show that is staggeringly difficult. Many people who are great chefs in New York City would fall flat on their faces in this kitchen. We take a cruel pleasure in watching fancy-pants chefs cook with Doritos.”

The latest incarnation of the show, “Chopped: Gold Medal Games,” concluded Jan. 30, 2018, with four chefs competing for a gold medal and $50,000 prize. “This is a job a billion people would want,” says Allen of his hosting gig. “Every single day we get chefs who achieve a different kind of deliciousness.”

Allen, a former food writer for Chicago Magazine, had his TV breakthrough in the Bravo channel series “Queer Eye for the Straight Guy.” He is a strong advocate for the LGBT community and not shy about sharing his political views on Twitter.

“I probably speak up more than I ought to, but I love my country,” says Allen, who talked with us about Columbus, the James Beard Award and his advice for a winning Valentine’s Day menu.

Your husband, Barry, is also a Columbus native. Do you get back often?
It’s a really weird coincidence we were both born in Nationwide Children’s Hospital. Barry’s parents, who are great cooks, are still in Columbus, so we go back at least once a year. We do a lot of antiquing in German Village and the Short North, and I have a sandwich that I order regularly at Katzinger’s [Delicatessen].”

In 2012, you won two James Beard Awards for “Chopped.” How did that feel?
I’ll never forget that night as long as I live. It means an enormous amount to me. It reflected the fact that the media community and the chef community embraced us. There’s only one night when it’s appropriate to wear those medals, and I remember telling the audience that they made the most wonderful clinking sound.

What’s a great romantic dinner for Valentine’s Day?
There must be chocolate — for me, dark chocolate … a mousse or a soufflé. And from Remedial Romantic Dinners, a class I once taught at the Institute of Culinary Education: rack of lamb, medium rare, heavily crusted with Maldon salt and cracked pepper and some kind of fruit sauce or fried chicken with a lot of thyme in the breading, served with champagne; also cheese and a leafy salad with champagne or sherry vinegar.