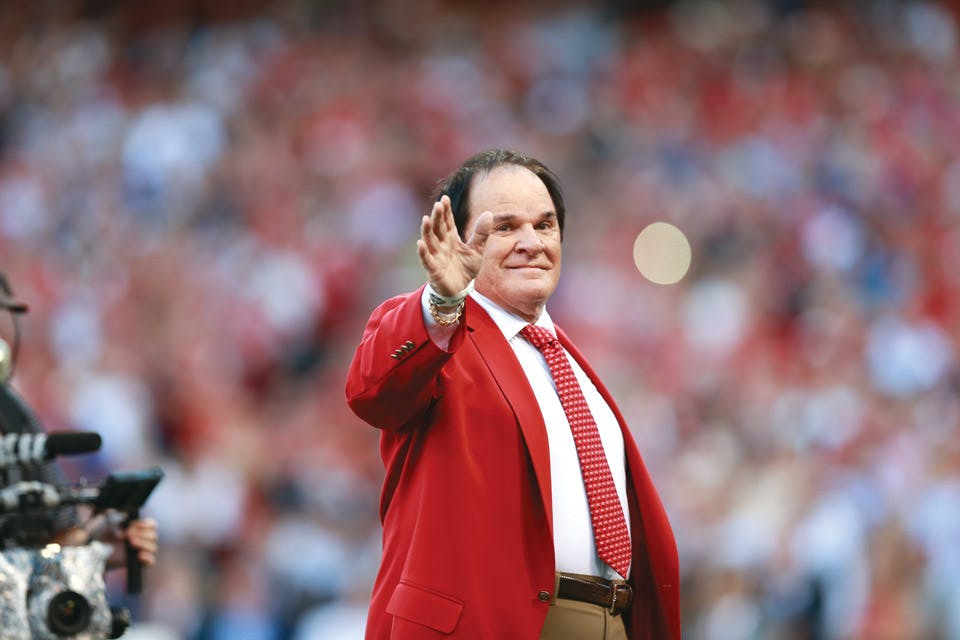 The Ohio native and all-time hit leader talks baseball, Cincinnati and the Hall of Fame.

When the Cincinnati Reds retire Pete Rose’s jersey this month, it should have dirt on it. Rose’s gritty approach to baseball earned him one of the game’s most iconic nicknames: Charlie Hustle.

“When Mickey Mantle and Whitey Ford give you a name it can’t be bad,” says the 75-year-old Rose. He got the moniker for running full speed to first base following a walk — something he began doing during his days in the minor leagues. “When I first did it, they called me a hot dog,” he adds. “When you start hitting .300, they back off.”

The ultra-competitive Rose never slowed down during a 24-year playing career that started and ended in his hometown of Cincinnati. Although the all-time hit leader was banned from baseball in 1989 following accusations that he bet on the sport, Rose will be enshrined in the Cincinnati Reds Hall of Fame during a pregame ceremony June 25 at Great American Ball Park.

“This is not second fiddle to Cooperstown for me,” says Rose from his home in Las Vegas. “How lucky was I leading off for the Big Red Machine? By next year, the first four guys in that lineup will all have statues outside the ballpark.”

We talked with Rose about his father, the 1976 Reds and his legacy.

Your father was a standout athlete who served as your biggest inspiration. What did you learn from him?
My father was the only person I ever idolized. When he played football, baseball and basketball, I was the water boy, batboy and ball boy. He was a better athlete in that town than I ever was. One game, I took a half-assed swing at a pitch and didn’t run hard to first base. He said, “Don’t ever embarrass me in this town like that again.” I learned the proper way to play the game from him.

Some baseball experts say the 1976 Reds, who were undefeated in the postseason, were the best team of all time. Do you agree?
I’ll never compare that team to the 1927 Yankees, but I’ll argue all day we were the most entertaining team ever. We could win 2-1 games and 11-10 games. Not many teams had great production from second base [Joe Morgan] and catcher [Johnny Bench]. That team had everything: speed, power and daring base running.

How has your lifetime ban from the National Baseball Hall of Fame affected you?
Any player’s ultimate goal is to be in the Hall of Fame. I messed it up, and I’m not going to whine to you or anybody else. I made mistakes, but I didn’t cheat the game. If I’m ever given a second chance, I’ll be the happiest guy in the world.

For information about the Cincinnati Reds Hall of Fame Induction Weekend, visit reds.com.