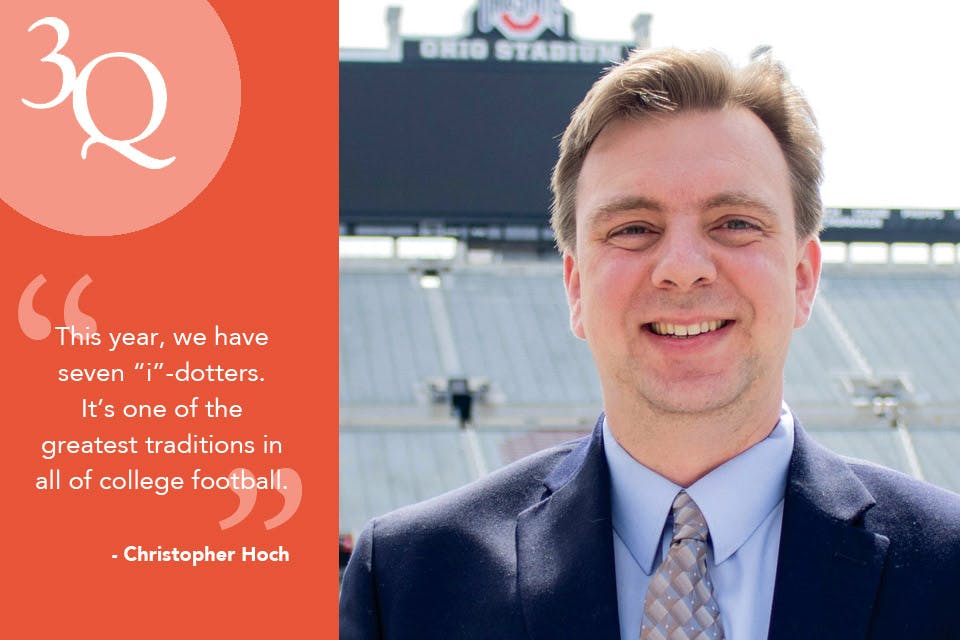 Legend has it that Buckeyes football coach Woody Hayes was so impressed by The Ohio State University Marching Band’s performance at a pep rally that he proclaimed it “the best damn band in the land.” The name has stuck ever since.

“We don’t have any actual evidence, but we like to think that’s the way it happened,” says Christopher Hoch, a Westerville North High School alum now in his second season as the director of The Ohio State University Marching Band. “We’d be honored if he actually said that.”

From the first Script Ohio in 1936 (during which the band spells out the state’s name in a flowing formation) to more recent halftime tributes to Broadway hits and the film “Back to the Future,” the ensemble consistently tops itself. It has performed for five presidents, played in London’s Wembley Stadium and will be seen by more than 50 million viewers in the 2018 Macy’s Thanksgiving Day Parade next year.

“You can’t get a much better experience than performing in New York City on Thanksgiving Day,” says Hoch.

A trombone player who missed the cut in his first tryout for Ohio State’s band (he made it as a sophomore), the 41-year-old Hoch talked with us about tradition, performance planning and, of course, dotting the “i”.

Ohio State’s all-brass and percussion band was first formed in 1878 as a fife and drum corps. What role does tradition play in today’s band?
Our students take pride in it and they take it very seriously. On alumni day this year, we had 750 members on the field at the same time and most of the crowd stayed through halftime to watch. We have 10,000 people show up for [pre-game rally] Skull Sessions at St. John Arena. That says a lot about our fans and our tradition.

What’s involved in planning your elaborate halftime shows?
It takes the better part of a year to get our shows ready for the coming season. The music comes first, then it’s arranged, and then I start writing the drill sequences. All of the shows we do now are more complex than when I was in the band. There are a lot of great college bands, but what makes us different is the level of complexity of what we do.

Script Ohio is a spine-tingling experience for fans to witness. How do you choose the sousaphone players who dot the “i”?
It was not that big of a deal when it started in 1936. The person who was at the top of the line just did it. ... We have a ranking system among fourth-year and fifth-year [sousaphone players] who have marched the most. This year, we have seven “i”-dotters. It’s one of the greatest traditions in all of college football.