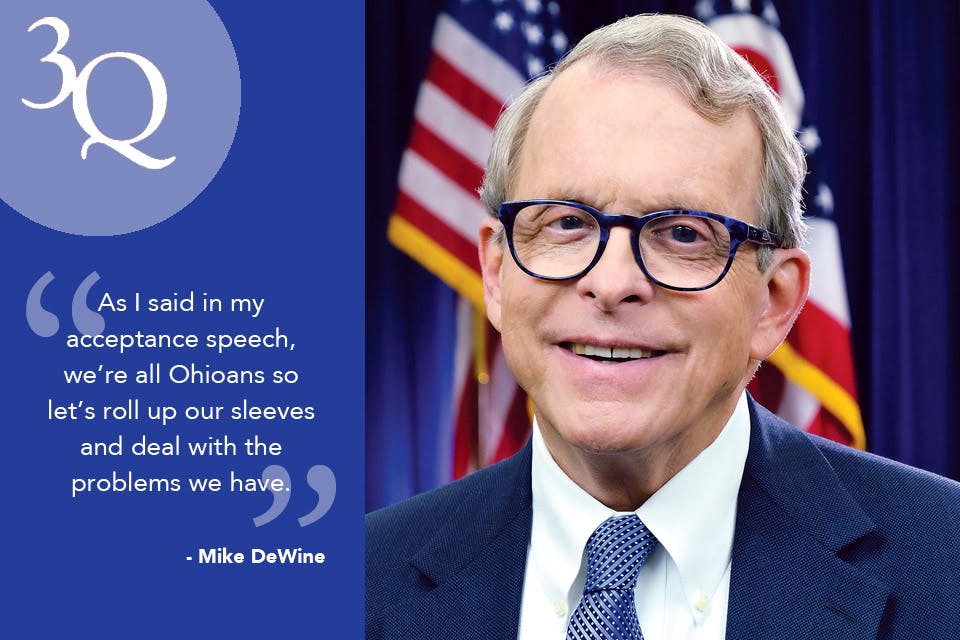 As he readies to begin his term as governor, we talk with the longtime public servant about his distinguished political career and the challenges facing Ohio.

Republican Mike DeWine’s already impressive political resume received an upgrade in November when he defeated Democratic challenger Richard Cordray in the race for Ohio governor. While it was one of several hotly contested midterm races across the country, DeWine says he is focused on working together.

“As I said in my acceptance speech, we’re all Ohioans so let’s roll up our sleeves and deal with the problems we have,” says DeWine, who assumes office Jan. 14 as the successor to Gov. John Kasich. “I have been able to work with both sides of the aisle over the years, and I think it’s particularly important as governor to reach out to legislators and, frankly, to the people who didn’t vote for me.”

“My wife Fran and I have been to all 88 counties several times,” he says. “When I was in Congress, our family would get in a camper and go from town to town.”

The Yellow Springs native and Cedarville resident talked with us about his early days, the challenges he will be taking on as governor and the time he ran against  John Glenn.

When did you first realize you might have political leanings?
When I was 10, I figured out I wasn’t going to be the second baseman for the Cincinnati Reds. I couldn’t hit a curve, I couldn’t hit a fastball and I couldn’t field very well either. Whatever debating skills I have were honed in Yellow Springs, which was a very liberal village. I was in the distinct minority.

What are the biggest challenges facing the state today?
Job training, education with a special emphasis on childhood development and the drug problem. Ohio employers can’t find people to work due to drugs and a skills gap. We need to have a real sense of urgency about the drug problem. If there was a terrorist killing 14 people a day in Ohio we would have the National Guard out. We have to focus on education and prevention, reaching our young people early so they don’t go down the path to addiction.

In 1992 you ran against John Glenn for a U.S. Senate seat, one of only two elections you’ve ever lost. What was that experience like?
It certainly was memorable. I was crazy enough to think I could beat John Glenn [laughs]. Two years after that bitter campaign, I was elected to the Senate and he and I were colleagues. One of the first things I did was make an appointment to go see him. There’s an example of two people who were in a very contentious race but ended up working together.