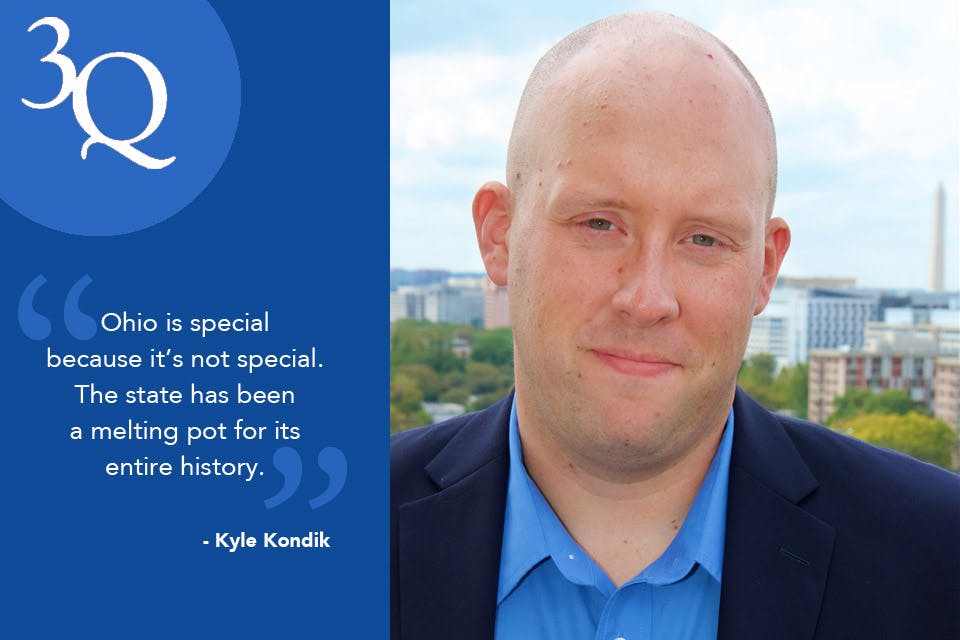 In all but two elections since 1896, Ohio has selected the winning presidential candidate. Here's why.

Beginning with this month’s Republican National Convention in Cleveland, our state will once again be a key focus for both presidential candidates on the road to Election Day. Since 1896, Ohio voters have failed to select the new president only twice: in 1944, when Franklin D. Roosevelt bested John Dewey, and in 1960, when John F. Kennedy edged Richard Nixon.

“Ohio is fascinating to national observers, because so few states are competitive now,” says Kyle Kondik, author of The Bellwether: Why Ohio Picks the President, out now from Ohio University Press. “It’s very likely Ohioans will see more of the presidential candidates than any other state. In campaign events during the 2012 election, 73 of the 253 events after the Democratic National Convention were held in Ohio.”

Kondik, an Independence native who became interested in politics while serving as an editor of the Ohio University student newspaper during the 2004 presidential election, says he feels that the state mirrors the country. “Ohio doesn’t have unique political or economic issues that drive it out of the mainstream,” he says.

Kondik, who works as a political analyst for the University of Virginia Center for Politics, talks with us about swing states, Ohio’s role as a national model and his predictions for November.

What makes Ohio so important on a national scale?
Ohio is special because it’s not special. The state has been a melting pot for its entire history. Northeast Ohio is the old Connecticut Western Reserve settled by Yankees, and the southern part of the state was settled by Southerners. American elections have traditionally been settled between the North and the South.

How do you see the presidential election playing out in Ohio and nationally?
We’ve been used to relatively close elections the last six or seven times, but if Trump turns out to be a really bad candidate, it is possible this election could be decided by more than 10 points. No Republican has ever won the White House without winning Ohio. Cuyahoga, Franklin and Lucas counties are important for Clinton, but if Trump can carry Hamilton and Montgomery counties, he could very well win the state. My fear writing this book is Ohio voting for the loser in November.

For more information about The Bellwether: Why Ohio Picks the President, visit ohioswallow.com.