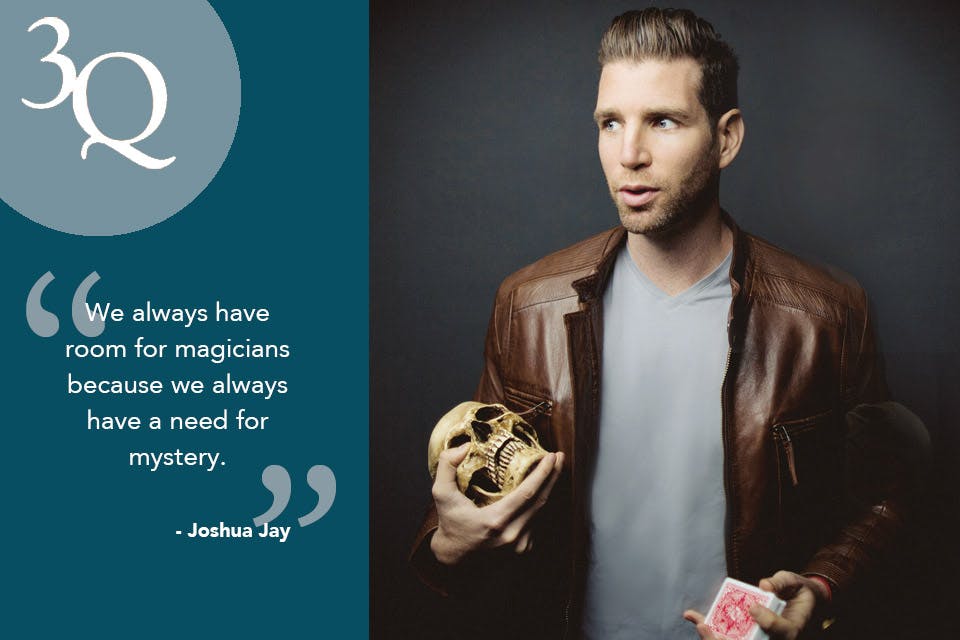 The magician has amazed Penn & Teller and Jimmy Fallon. We talked with the Canton native about his craft and why magic still fascinates us.

Magic was always in the cards for Joshua Jay. Growing up in Canton, he was fascinated by the card tricks his dentist father performed to keep his patients calm.

“When I was 7, my father showed me a trick but didn’t tell me how it was done,” Jay says. “I went to my room and tried to figure it out. I had charts on the floor and tore up a deck of cards. It was about three things: feeling astonished, breaking the trick down by reverse engineering and getting a rush from performing it.”

After a couple hours, Jay had mastered the trick, and soon he was performing all over Ohio as an 8-year-old sleight-of-hand magician.

“I did the Youngstown home-and-flower show, every church, temple and VFW,” he recalls. “I even did birthday parties for the bullies from my school.”

Jay has performed in 117 countries and baffled Penn & Teller on their TV show “Fool Us.”  He is also co-director of Magifest, the country’s oldest magic convention, set this year for Jan. 16 through 18 in Columbus. Jay talked with us about his college years, our state’s legacy as a hotbed of magic and the importance of his craft in the modern world.

You majored in creative nonfiction at The Ohio State University. How did that prepare you for a career in magic?
Every trick has an origin story, so a huge part of what I do is storytelling. At Ohio State, it was how can we help you be better with your magic? They helped me come up with an original curriculum for teaching magic, which became my first book that has been translated into six languages. I spoke [at Ohio State] a couple months ago, and it was wonderful to be surrounded by people who helped me become what I am.

Ohio has a reputation as a haven for magic, including the International Battle of Magicians in Canton next May. Why?
Kenton, Ohio, is the founding place of the International Brotherhood of Magicians, the largest organization of its kind in the world. Canton Magic Crafters is a part of a local network of magicians. All over Ohio there are magic clubs where older guys are helping out the younger guys. And I’ve always loved Magifest, which was a life-changing event for me.

Thanks in large part to technology, the power of wonder is declining. How does magic continue to captivate us?
We always have room for magicians because we always have a need for mystery. There’s almost nothing we don’t know anymore. Magicians are the last remaining pieces of intellectual real estate. Much smarter and more subtle magic has emerged. The trick I did for Penn & Teller took over a year of constant work and tweaking. It’s a passion that takes a lot out of me, but I get a lot out of it.