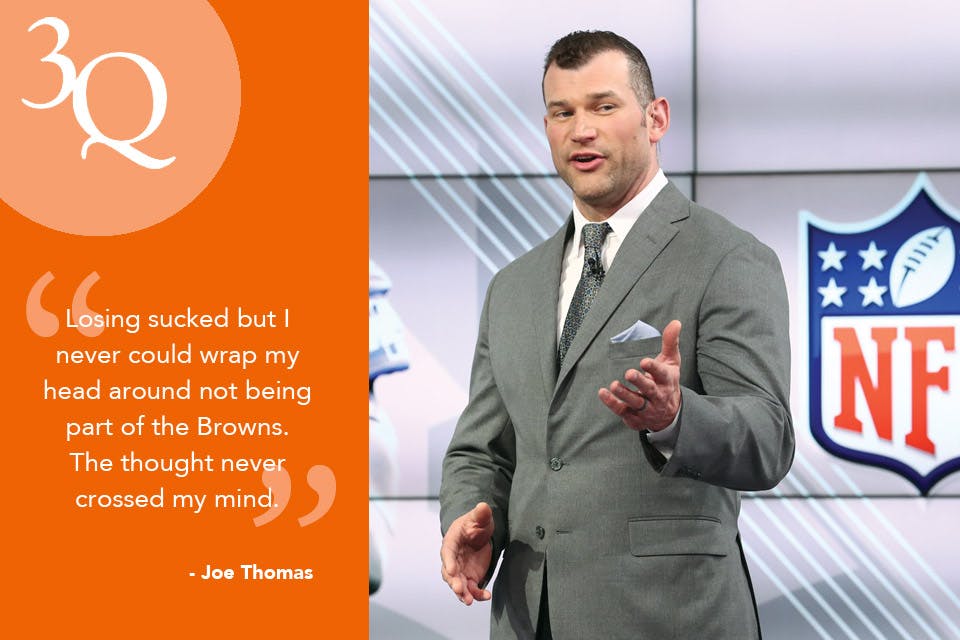 The retired Cleveland Browns tackle talks about his playing streak, his job at the NFL Network and how he expects his former team to do this season.

While many of the top college football prospects gathered in New York City for the 2007 NFL Draft, Joe Thomas joined his father, father-in-law and a former high school coach for a fishing trip in Wisconsin.

“The whole idea was that I didn’t want to go to New York,” says Thomas. “I didn’t care about endorsements and putting a suit on. The hay was in the barn … draft day is just a day you find out how you did on a test. What better thing to do than go fishing?”

There was one caveat: Thomas had to motor in close to shore to be in range to receive the phone call from the Cleveland Browns that confirmed him as the third pick of the draft. The Wisconsin All-American went on to play 11 seasons for the team, making 10 Pro Bowls and playing an incredible 10,363 consecutive snaps at left tackle.

A fan favorite who exemplified the blue-collar mindset of the city, Thomas was the rarest of pro athletes — one who spent his entire career with the same team. “Losing sucked but I never could wrap my head around not being part of the Browns,” he says. “The thought never crossed my mind.”

This season, Thomas is an analyst for the NFL Network’s Thursday Night Football telecasts. The 34-year-old (whose business interests include Mission BBQ locations in Parma, Canton and Mason) talks about his new gig, his amazing consecutive-snap streak and his predictions for the Browns this season.

Why did you decide to go into broadcasting?
I love teaching and coaching but coaches in college and pro football don’t have the time to be fathers or businessmen. To be one of the faces of the network is cool. This gives me enough of a taste of the game. It’s a dream post-retirement job.

To stay healthy in the NFL for over a decade is virtually unheard of. How were you able to play so well for so long?
There were a lot of factors — mainly genetics. I was blessed with really, really dense bones. I took care of my body and did lots of yoga and a lot of stretching. I kept in tip-top shape and had very good spatial awareness on the field, knowing where all the players were. There are a lot of things I miss about the game, but I don’t miss how my body [felt] during the season.

There is a lot of hype surrounding the 2019 Browns. Will they live up to it?
After everything this franchise has been through, they deserve to have some hype. People are talking about the team in a positive light instead of talking about who’s going to be the quarterback or who’s going to be the coach. They have loads of talent. I think 11-5 or 10-6 is probably a pretty good guess. And I think they’re going to make a great run in the playoffs.

For more information about Joe Thomas’ work on the NFL Network, go to nfl.com/network.