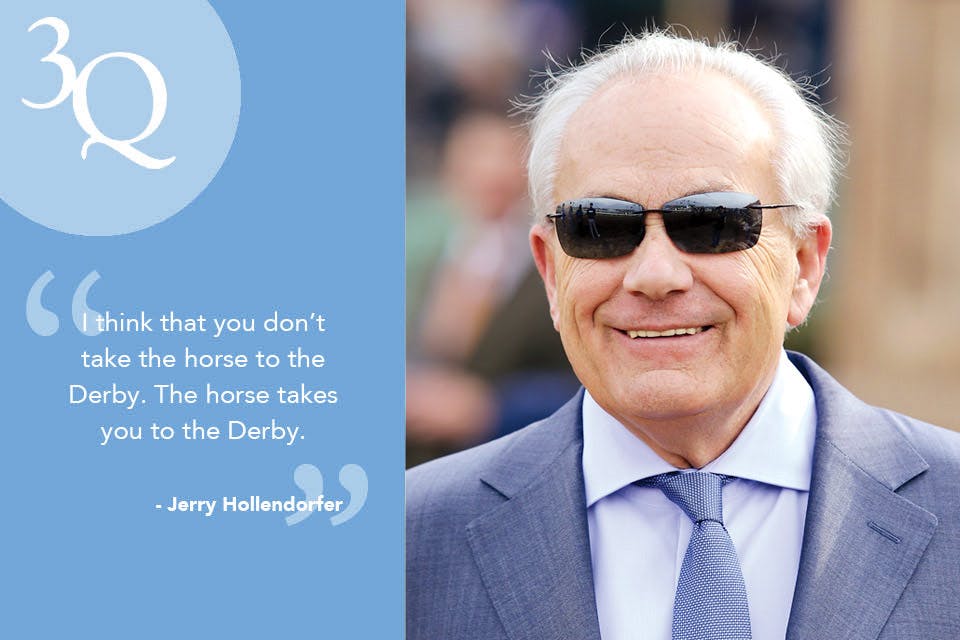 We talked with the Ohio native and National Museum of Racing and Hall of Fame inductee about the Kentucky Derby, hard work and what it takes to win.

May 2019
BY Barry Goodrich | Photo by Zoe Mertz Photography

May 2019
BY Barry Goodrich | Photo by Zoe Mertz Photography

When Jerry Hollendorfer moved from Bath, Ohio, to California in the late 1960s to work in the stables at Bay Meadows racetrack, his parents were less than enthusiastic. Anthony Hollendorfer worked at the Chrysler plant in Twinsburg, while his wife, Geraldine, was employed by legendary televangelist Rex Humbard at the Cathedral of Tomorrow in Cuyahoga Falls.

“When I went into horse racing they were very upset,” says Hollendorfer. “They didn’t believe in any sort of gambling. In a sense, they were strict, but they gave me the freedom to make my own decisions.”

The son, who worked summers at the Chrysler plant to pay his way through the University of Akron, would one day hand his father the trophy for winning the 1989 Ohio Derby with King Glorious.

“That might have changed his mind,” says Hollendorfer, who has won more than 7,500 races and nearly $200 million during his 40-year career as a trainer. Inducted into the National Museum of Racing and Hall of Fame in 2011, he is still chasing a win in the Kentucky Derby, held May 4 this year. We talked with Hollendorfer about the Derby, his work ethic and gambling.

Your horses have won three Kentucky Oaks races, three Breeders’ Cup events and three Eclipse Awards. What would it mean to win the Kentucky Derby?
Every trainer wants to win the Kentucky Derby, and don’t believe any trainer who says it doesn’t matter. It’s America’s race. Even if someone knows nothing about racing they know about the Derby. I was third with Battle of Midway [in 2017]. It’s a hard race to win, and there is a lot of luck in winning it. I think that you don’t take the horse to the Derby. The horse takes you to the Derby.

You started out mucking stalls and now have horses running at three California tracks throughout the racing season. What keeps you motivated?
I don’t have a day off. I get up every day around 2:30 a.m. and get to the track at 3 a.m. to do preliminary work. I’ll start training horses at 5 a.m. I have horses at Golden Gate, Santa Anita and Los Alamitos. The only way I could get started was to put up my own money to buy some horses. I still like to put my money into 2-year-olds and develop them. It’s a business model that has worked for me. If you start winning, people start to notice you. … That’s what happened to me. If you do your job, good things will come to you.

Do you bet on your own horses? I don’t. That’s the policy in my barn. If the people who work for me are betting, they keep pretty quiet about it. When I first started getting horses, they were from owners who were betting a lot of money. I wanted to make sure there was no conflict of interest. Betting is for the people who come to the track to bet.