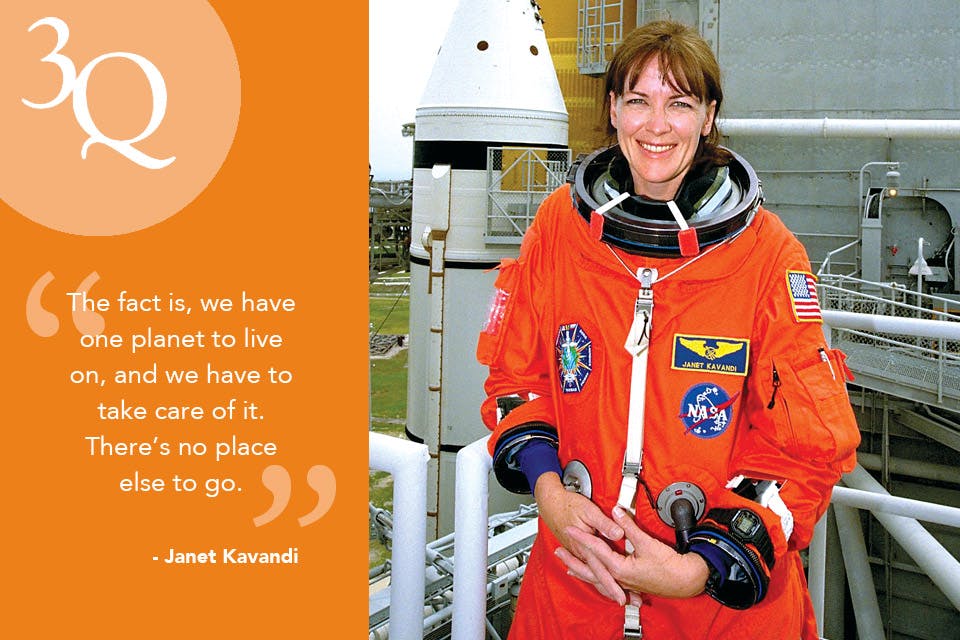 The director of the NASA Glenn Research Center in Cleveland discusses her time in space and being inducted into the U.S. Astronaut Hall of Fame.

As a young girl growing up in rural Missouri, Janet Kavandi kept her eyes on the night skies, gazing at the stars from her back porch. With her father by her side, she began what would become a lifelong passion for science and space exploration.

“I was a daddy’s girl and one of my favorite things was to talk with him about what it would be like up there,” says Kavandi. “Looking back, I believe he’s in heaven, and he’s got the best view of everything.”

Kavandi was able to live her dream, flying three NASA shuttle missions between 1998 and 2001, logging more than 33 days in space and traveling over 13 million miles on 535 Earth orbits. Director of NASA’s John H. Glenn Research Center in Cleveland since 2016, Kavandi will be inducted into the U.S. Astronaut Hall of Fame at the Kennedy Space Center Visitor Complex in Florida this month.

The former director of flight crew operations at NASA’s Johnson Space Center in Houston is being honored for her accomplishments in furthering the agency’s mission of exploration and discovery, one of just 99 individuals to earn the honor. Kavandi talked with us about her time in space, training with John Glenn and NASA’s future projects.

Did you gain a new appreciation for planet Earth during your space flights?
I had a God’s-eye view of things like the severe deforestation in the Amazon and the plumes of smoke from burning rice fields in Southeast Asia. I could see the loss of ice in the world’s major ice sheets and the shrinking of some of the lakes and other bodies of water. We don’t get enough of that perspective from the ground. We’re changing the planet for sure. The fact is, we have one planet to live on, and we have to take care of it. There’s no place else to go.

You trained with a 77-year-old John Glenn for his space shuttle mission in 1998. What was that like?
We did water-survival training together. ... I have a great picture of him and I together in our space undergarments. I remember he was almost inseparable with his wife, Annie. He was a very respectful human being and was kind to everyone. I hope I can do the same kind of things at that age as he did.

What are the biggest projects for NASA in the near future?
In July, the Glenn Research Center will be testing the Orion crew capsule and service module at our Plum Brook Station in Sandusky. It is scheduled to launch from the Kennedy Space Center in 2020. We’re also working on Gateway — a lunar outpost where astronauts can live and send landers down to collect samples. Eventually, NASA will likely send humans to set up a habitat on the moon and see if food can be grown and life sustained. It’s the same thing we want to do on Mars.

For more information about the U.S. Astronaut Hall of Fame, visit kennedyspacecenter.com.