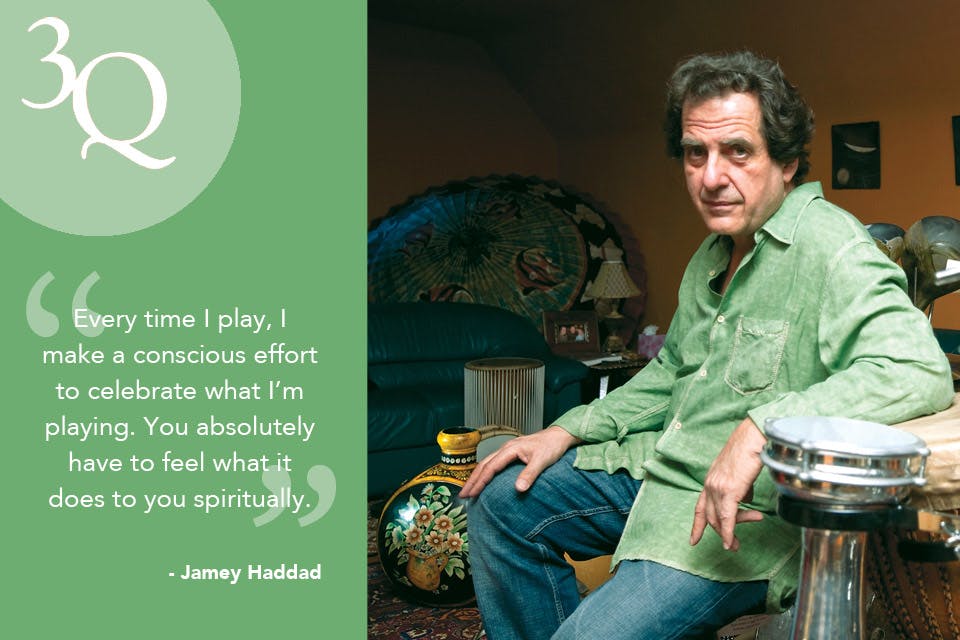 The Oberlin Conservatory of Music professor discusses playing with Paul Simon, teaching and the power of percussion.

When Paul Simon walked on stage to play his historic farewell concert in New York last month, percussionist Jamey Haddad was once again backing him. In fact, the Ohio-based musician has collaborated and performed with the iconic singer-songwriter for the past 20 years.

“Paul considers himself as a poet who got lucky in the music world,” says the 66-year-old Haddad from his Oberlin home. “There are three generations of people who turned out for these shows, a huge spectrum of age groups.”

Haddad, who grew up in South Euclid, attended the Berklee College of Music, where he returned to teach from 1992 to 2010. Today, he is the professor of advanced improvisation and percussion at the Oberlin Conservatory of Music and also teaches at the Cleveland Institute of Music. A longtime fan of Indian, Brazilian and African music, Haddad continues to follow an ever-changing muse.

“I’m a jazz drummer who jumped the fence,” says Haddad, who has also collaborated with Carly Simon, Yo-Yo Ma and Esperanza Spalding. “Music has a powerful social functionality. I’ve always thought it held a mirror up to you as a person.”

Haddad’s latest musical project, Under One Sun, will play Cleveland’s Bop Stop and Nighttown clubs this month. We talked with the versatile musician about his first musical experiences, the art of collaboration and teaching at Oberlin.

How did you first become attracted to the drums and percussion in general?
I was 4 years old and we were at an Arabic picnic. It was the most fun I’d ever seen people having. I saw someone playing a darbuka drum and I told my father I could do that. He laughed but bought me one, and then my grandfather bought me a drum set. I took piano lessons, but that guy was really a drag. I was very dyslexic, but my drum teacher really helped me tremendously.

What attracts you to collaborating with other artists?
For me, it’s always been about accompanying other people. I’ve always intuitively understood what makes the music even more fun to participate in. In my mind, there’s nothing anyone else can play that I can’t make sound better … something I can add amazing textures to. Every time I play, I make a conscious effort to celebrate what I’m playing. You absolutely have to feel what it does to you spiritually.

How have you been interacting with your students at Oberlin?
I’m integrating the jazz department with the classical department, giving them both a safe place to improvise. I think it’s going to be a new trend. I’ve taken students to India and Brazil. You have to go there to get the vibe. It’s a cosmic world out there. … We’re all part of the same tribe.