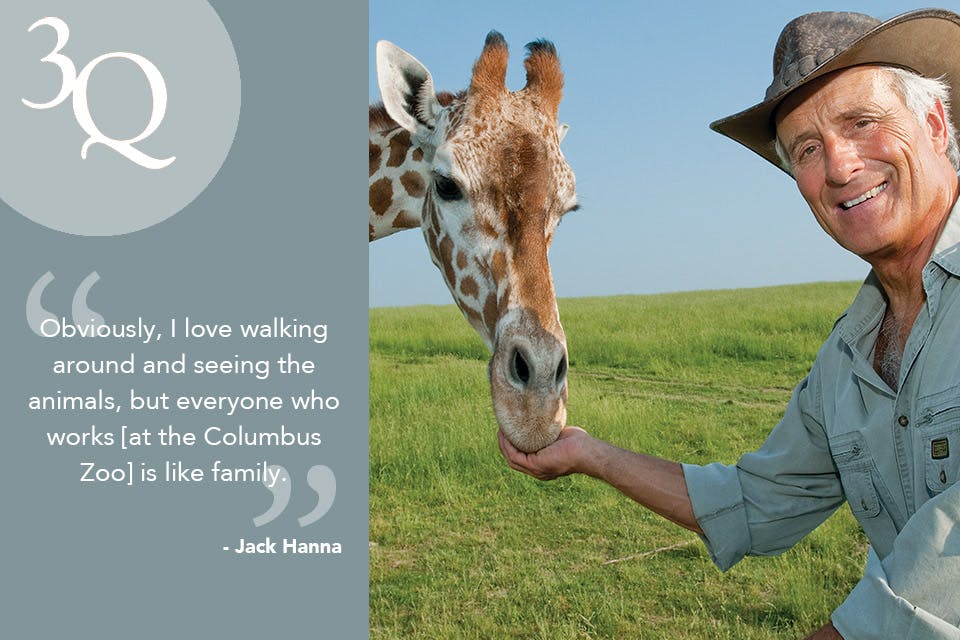 As he nears retirement, the Columbus Zoo’s iconic ambassador discusses the zoo’s evolution, his TV appearances and leaving his adopted hometown.

Jack Hanna’s dorm at Muskingum College was the original “Animal House.” First, Hanna brought his pet donkey, Doc, from his family farm in Tennessee. After he had been on campus a little while, he added some ducks to the mix. It didn’t take long for word to spread about the school’s most unusual freshman.

“It took about two days until they found out I had ducks in my room, so I had to put them in a lake,” says the enthusiastic 73-year-old Hanna from his summer home in Montana. “I kept the donkey in a shed on campus.”

The college was also where Hanna met another animal lover: his future wife, Suzi. (The newlyweds danced to the song “Born Free” at their wedding.) In 1978, the Hannas embarked for the Columbus Zoo and have been a constant presence there ever since. Jack Hanna will retire at the end of this year, after decades of television appearances, books and nonstop promotion of one of the world’s finest wildlife showcases.

Taking a break from hiking with Suzi in Glacier National Park and tending to their farm populated by chickens, alpacas, goats and, of course, donkeys, Hanna talked with us about developing the Columbus Zoo, a remarkable appearance with David Letterman and saying goodbye to his adopted hometown.

When you came to the zoo, it was struggling. How did you turn it around?
My buddy in Tennessee had a plane and we flew up to Columbus. When we got there, he called the tower to ask where the zoo was. The guy said, “We don’t have a zoo.” The guy who came to pick us up didn’t know where the zoo was. We ended up getting support from Nationwide Insurance and Worthington Industries to build new enclosures. Jack Hanna didn’t build that zoo, the city of Columbus and the people who lived there built it.

You made many appearances on “Late Night with David Letterman.” Which one was the most memorable?
We had rescued a beaver and brought it on the show. We placed it in a tub in front of David Letterman, so the beaver would slap his tail and splash water on David. When it was time to leave the stage, I was holding the beaver when the drummer hit the drums and the beaver bit through my hand. There was blood flying everywhere. I walked to the hospital four blocks away, holding my hand against my stomach. The emergency room nurse was screaming that I was a shooting victim. I told her I was bitten by a beaver in Central Park.

What will you miss most after your final day at the zoo on Dec. 31?
I’m retiring but that doesn’t mean I won’t be going back to the zoo. Columbus has one of the greatest zoos in the country. It helps support conservation projects worldwide. Obviously, I love walking around seeing the animals, but everyone who works there is like family. Not seeing them is going to be rough.