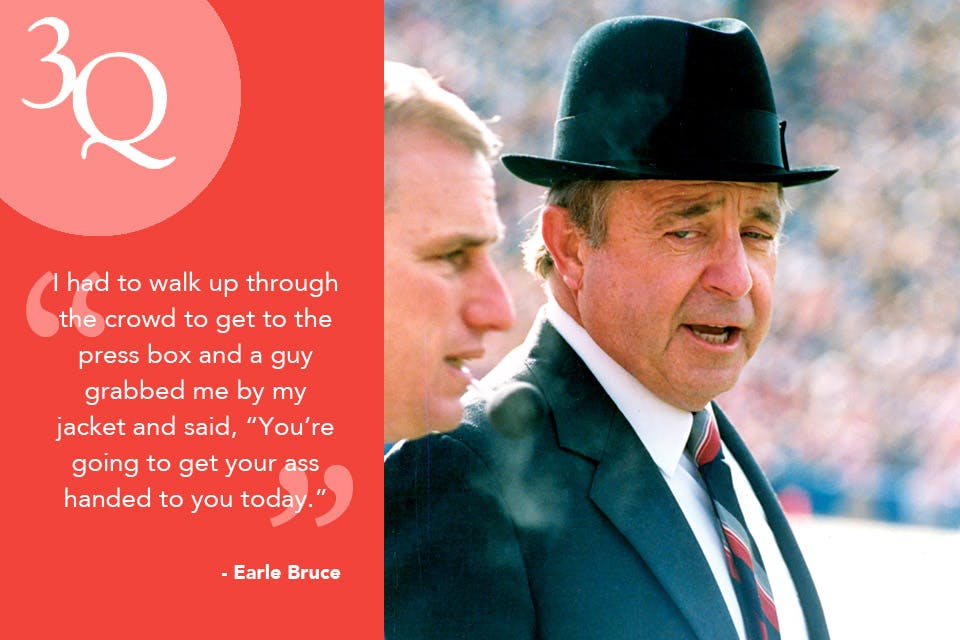 We talk with former Ohio State football coach Earle Bruce about his time on the sidelines, working with Woody Hayes and the fierce rivalry with Michigan.

The ecstasy and despair surrounding college football’s greatest rivalry was never more evident than in the 1987 meeting between Ohio State and Michigan in Ann Arbor. OSU head coach Earle Bruce had been dismissed earlier in the week, adding intensity to a game never lacking for drama. The Buckeyes, wearing “Earle” headbands beneath their helmets, pulled out a thrilling 23–20 victory, hoisting the coach on their shoulders at game’s end. “I went into the Michigan locker room after the game and saw Kirk Herbstreit,” says the now-82-year-old Bruce, who was recruiting the talented Centerville quarterback at the time. “I told him to get his ass out of there because he was going to Ohio State.” We talked with Bruce about The Game, his firing and his relationship with Woody Hayes.

You had a 5-4 record against Michigan, winning three of those games on the road. What makes this such a fierce rivalry?
The history makes it a great rivalry. We hate to lose to them and they hate to lose to us. When you play up there, there’s a hell of a lot of blue and yellow and not much scarlet and gray. When I was an assistant in 1969, I had to walk up through the crowd to get to the press box and a guy grabbed me by my jacket and said, “You’re going to get your ass handed to you today.”

You found out five days before the Michigan game you would not return as coach. How did that affect the team?
We decided we weren’t going to concentrate on me being fired. We were going to concentrate on beating Michigan. The players were relentless all week. On Senior Tackle day, they told me, “You’ve got to hit that sled because you’re graduating with us.”

What was it like coaching under Woody Hayes?
He was tough to work for and he didn’t pay well. I was making $17,500 coaching at Massillon and took a pay cut to $10,000 when I came to Ohio State [in 1966]. The next year, we lost our homecoming game to Illinois, and Woody told the coaching staff we had to win the last four games to save our jobs. We did, and in 1968 we won the national championship with 17 sophomores on the team. Those players were so good they could have won [the title] when they were freshmen.