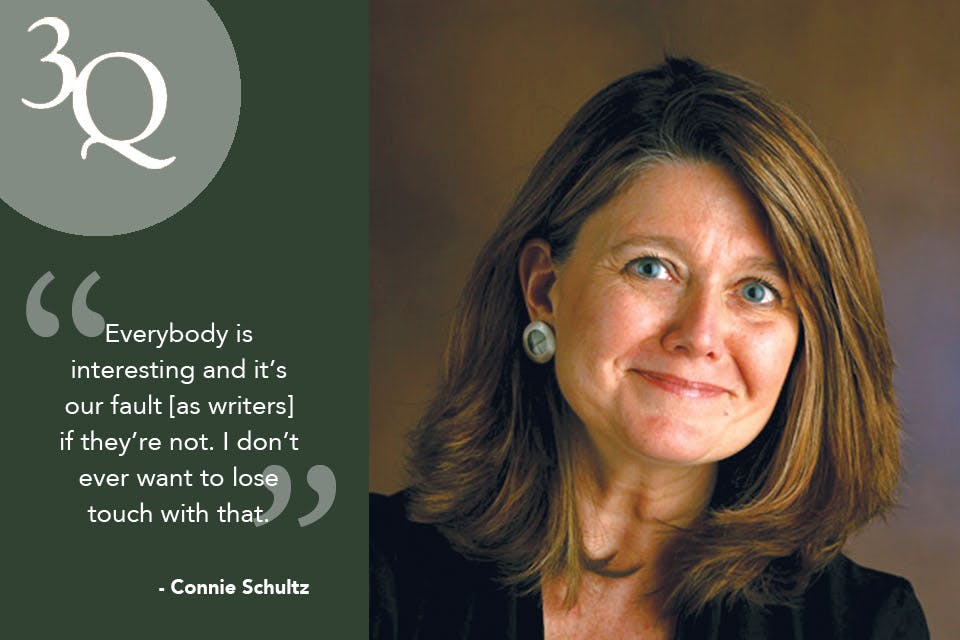 In April of 2005, Connie Schultz got the phone call that most writers only dream of receiving.

“Sherrod [Brown] and I were in a hotel room in New York City when my phone rang,” recalls Schultz, then a columnist for Cleveland’s daily newspaper, The Plain Dealer. “It was [editor-in-chief] Doug Clifton calling. I asked him if he had bad news for me. He said, `Is it bad news to win the Pulitzer Prize?’ ”

As Schultz struggled to keep her composure, her husband, who was elected to the U.S. Senate in 2006, began waving his arms, asking if she had won the award.

“I finally nodded to him, kissed his cheek and took the phone into the bathroom,” recalls Schultz.

The Pulitzer judges called Schultz’s columns “a voice for the underdog and the underprivileged.” In 2003, she won the Robert F. Kennedy Award for Social Justice Reporting for her series on Michael Green, who was imprisoned for 13 years for a rape he didn’t commit. After reading Schultz’s stories, the real rapist turned himself in.

This month, Schultz receives the 2018 Ernie Pyle Lifetime Achievement Award during the National Society of Newspaper Columnists conference in Cincinnati. The Ashtabula native, who just finished her debut novel, The Daughters of Erietown, talked with us about her latest honor, appearing with her husband on stage and teaching at Kent State University.

How does it feel to join former Ernie Pyle Lifetime Achievement Award winners such as Art Buchwald, Roger Ebert and Dave Barry?
When I started at The Plain Dealer one of my readers sent me copies of Ernie Pyle’s Brave Men and [Lee G. Miller’s] The Story of Ernie Pyle. What struck me about Ernie Pyle was his view that there was no such thing as an ordinary person. Everybody is interesting and it’s our fault [as writers] if they’re not. I don’t ever want to lose touch with that.

On June 8, you and your husband will give a reading of the play “Love Letters” as part of Cleveland State University’s AHA! Festival. What can we expect from the performance?
I told Sherrod this sounded like fun and he agreed. The challenge for him is that he’s not supposed to look at me until the very end of the reading. We’re so used to turning to each other and making comments.

What have you learned while teaching journalism at Kent State University?
If you’re really feeling hopeless about this country, get to know some millennials. They have such a fire and a real sense of purpose. So many of us got into journalism because of Woodward and Bernstein and Watergate … who would have known that Donald Trump would win the presidency and call us fake news? This is our Watergate.