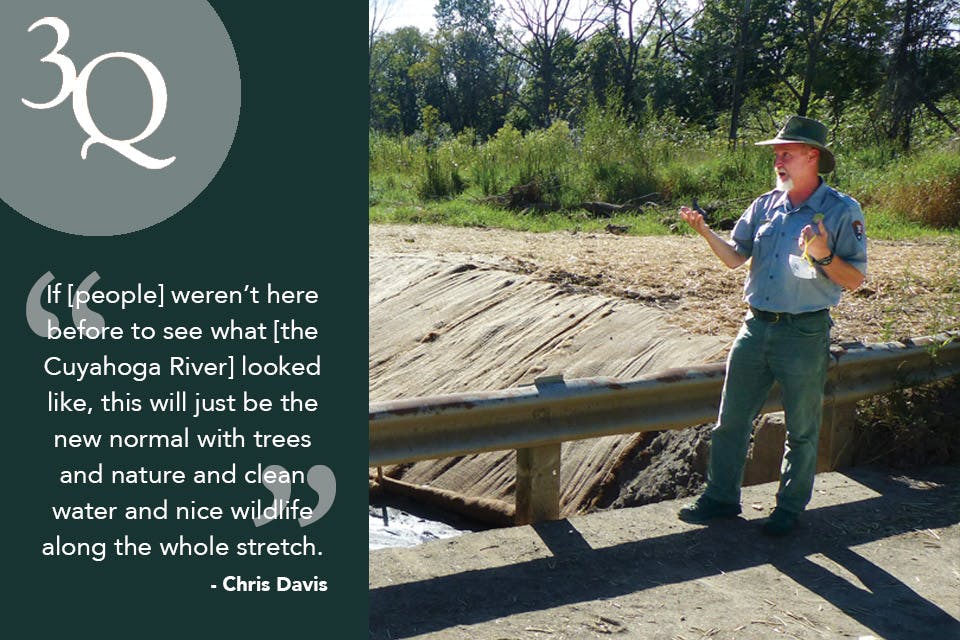 The Cuyahoga Valley National Park biologist talks with us about a project that aims to return the Cuyahoga River to a more natural state.

Since 2009, Chris Davis has been a biologist and plant ecologist for Cuyahoga Valley National Park. A lot of his time is spent researching and writing grants for funding, but he also oversees projects within Ohio’s only national park.

“In a typical year, we have 2,000 volunteers helping us plant trees, collect seeds, control invasive plants … I do a lot of site visits to see if this is a place where we could restore habitat. That’s one of my biggest things.”

Davis’ most recent work includes restoring a portion of the Cuyahoga River within the park. Even though environmental strides have been made since the 1960s, the Cuyahoga River has been listed as a Great Lakes Area of Concern since 1987.

Work has already started on planning and design for the project’s first phase, which will include adding bends to the sides of the river to naturalize water flow and reduce erosion from the Boston Mills ski area north to Vaughn Road. Phase two will focus on naturalizing the riverbanks near where the Brecksville dam was removed to create space for native trees to grow. We talked with Davis about why these improvements matter for the river and those who use it.

Over the past 50 years, the Cuyahoga River has been regarded as a success story. What are the biggest threats to its health today?
One is climate change. Over the past 50 years or so, even though we’ve done a lot of work collectively as a society to improve water quality and sewage disposal into rivers, at the same time, our patterns of precipitation have changed drastically. ... We’re now getting way more rain than we had 30 or 40 years ago, and the river is still the same. … The second-biggest threat that goes with that is increasing development in the watershed, because more of that rainfall now cannot soak into the ground.

What changes specifically are being made along the river?
We’re trying to make the river a little longer to help accommodate some more of this increased flow and trying to decrease the speed of that flow. … We’re doing our best to reforest a lot of areas that should be forested to decrease runoff. And then, more on the visitor and recreational side … we’re trying to improve river access points. We’ve never really had that.

What are some of the biggest ways those who use the river will see the benefits?They might not even know it unless they’ve been paddling the river for a long time, but they will see nice native streamside forests growing down to the edge. Right now, the typical paddling experience along much of the river is just vertical, unvegetated, eroded banks. … If [people] weren’t here before to see what it looked like, this will just be the new normal with trees and nature and clean water and nice wildlife along the whole stretch.