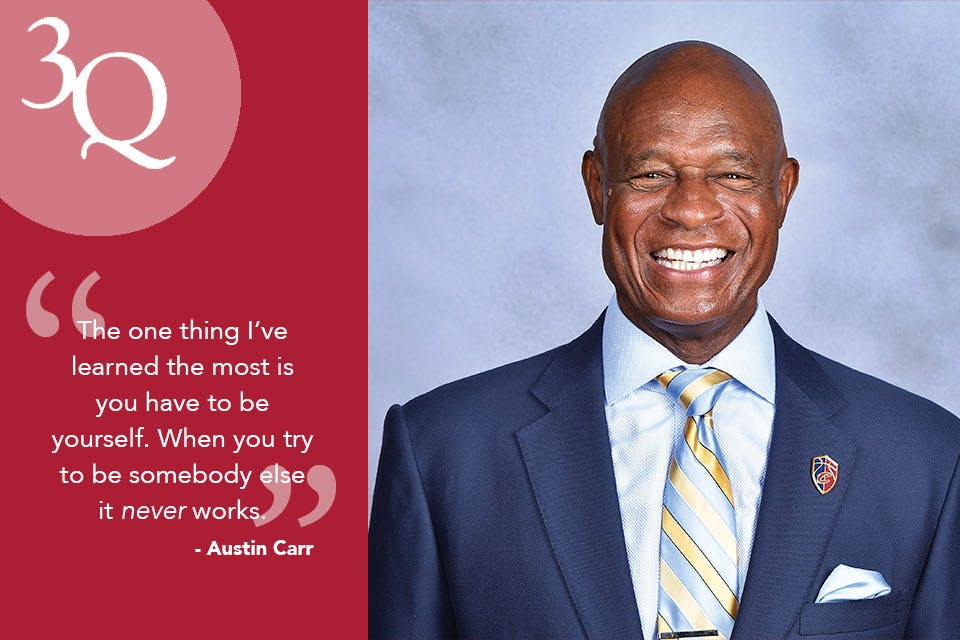 This former NBA player was a Cavaliers standout before becoming the team’s TV analyst. As the All-Star Game returns to Cleveland, we talk to the man known as “Mr. Cavalier.”

If you’re a Cleveland Cavaliers fan, Austin Carr has starred in your highs and lows. The Cavs took Carr, a scoring machine out of Notre Dame, with the number-one pick in the 1971 NBA Draft, and ultimately retired his number 34. Carr made the 1974 All-Star team and was a member of the upstart 1976 squad that beat the star-heavy Washington Bullets in the playoffs. That was the Cavs’ signature postseason moment of glory before its 2016 championship.

Carr, a full-time TV analyst for the Cavs since 1997, is a legitimate state treasure. His enthusiastic homerism features a signature phrase “Get that weak stuff outta here” that even inspired a local beer. Nobody is complaining, and he wouldn’t care if they did.

“The one thing I’ve learned the most is you have to be yourself,” says Carr. “When you try to be somebody else it never works.”

With the NBA All-Star Game returning to Cleveland in February after 25 years, we asked Carr about the All-Star Game’s significance to the city in 1997, his NBA career and what being “in the zone” means now.

What did having the NBA All-Star Game mean to Cleveland in 1997?
It meant a lot, because it really brought eyes on the city. At that time the city was trying to really get themselves back going in the right direction. [Now] the city has done an awful lot to make itself look more modern. … It’s definitely become a destination. When I first came to Cleveland, I never thought that it would be that way. Downtown was really not in good shape. I understood that it was going to be a football town, and I wanted to put basketball on the map there. To have it where it is now, it feels good that I was part of the renaissance.

Many Cavs fans know you as a broadcaster. How would you describe yourself as a player to someone who didn’t see you play?
You know what that means? That means I’m old! [Laughs]. The only regrets I have is that I couldn’t stay healthy enough to be myself in the professional rank. After my fourth year and all the operations, man, it was just hard being who I really wanted to be. I’d say I was like Donovan Mitchell [of the Utah Jazz], a physical player who could score from anywhere — and I loved to attack the hoop.

Basketball players get “in the zone.” When do you know you’re “in the zone” calling a game?
Usually, it happens when the team is playing well, and you just feel it. They’re making plays. It’s up and down, fast tempo. What I noticed is it just comes out. That’s when I know I’m in the zone. It flows. You don’t have to think about what’s going on. You just let it happen.