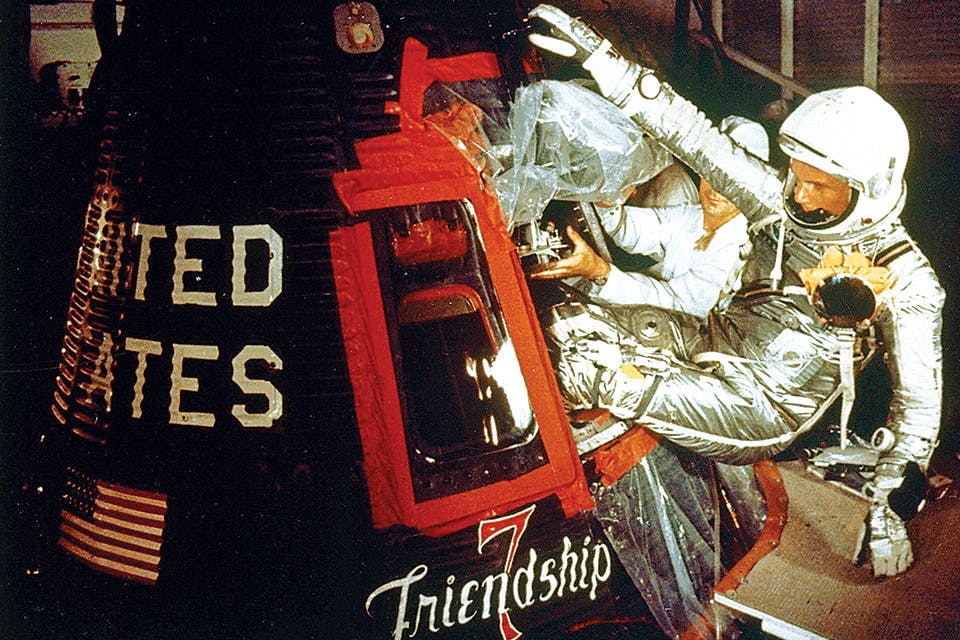 In February 1962, all eyes turned to Ohio as the state celebrated its native son becoming the first American to orbit the Earth.

It was the launch heard around the world. A United Press International story in Cambridge’s evening newspaper, The Daily Jeffersonian, on Feb. 20, 1962, reported that Ohio’s own Lt. Col. John Glenn Jr. had been launched into space at 9:47 a.m. that morning, becoming the first American man to orbit the Earth.

At Muskingum College in New Concord — the city where Glenn grew up following his birth in nearby Cambridge — 1,200 people gathered in the gymnasium to watch the event. (Both Glenn and his wife, Annie, had attended the school.) Glenn’s parents witnessed it at their home as news reporters gathered out front.

“We have been looking forward eagerly to this takeoff,” Muskingum College President Robert Montgomery told a United Press International reporter following the launch. “Now we are anxiously awaiting his recovery.”

Glenn completed three Earth orbits, before his Friendship 7 capsule splashed down in the Pacific Ocean, after four hours, 55 minutes and 23 seconds in space. Following a series of health tests that revealed space travel didn’t have any immediate adverse physiological effects on Glenn, he was reunited with his immediate family.

“One of the medical examiners, Dr. Ashton Graybiel said in fact that Glenn, ‘did just a hair better on some of his balance tests following the flight than he did in pre-flight checks,’ ” according to a UPI report in the Feb. 22, 1962, edition of The Daily Jeffersonian.

Glenn’s parents, Mr. and Mrs. John Glenn Sr., departed Ohio two days after the launch to join their son in Washington, D.C., where Glenn was awarded the Distinguished Service Medal of the National Aeronautics and Space Administration. Parades were hosted for Glenn in major cities like New York and Washington, D.C., but New Concord would not be left out of the fun. A homecoming parade was hosted March 4, 1962, with an estimated crowd of between 50,000 and 75,000 people in attendance. The parade ended at the Muskingum College gymnasium, where Glenn was informed the venue would be renamed in his honor.