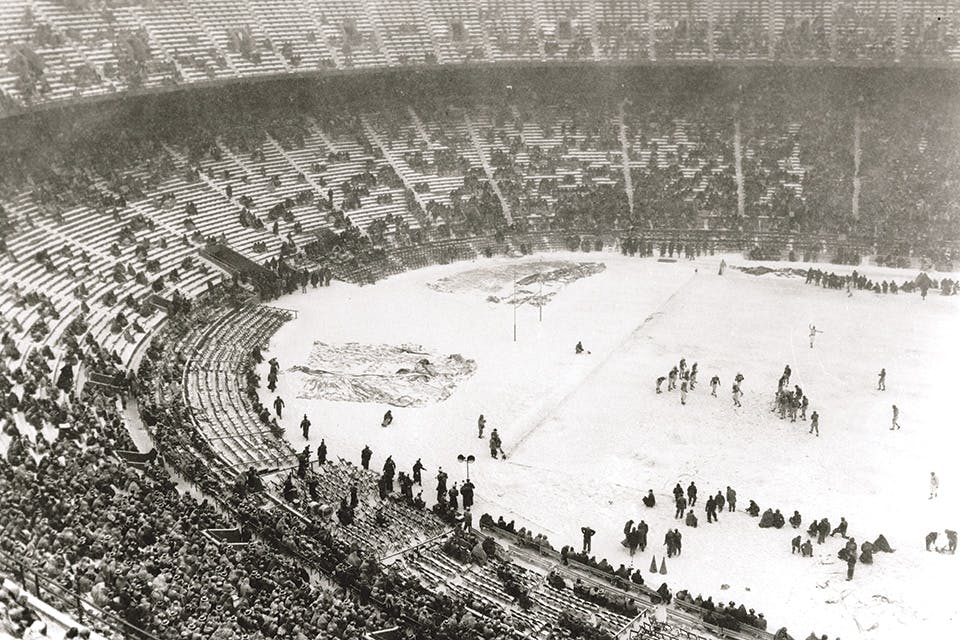 The Buckeyes and Wolverines faced off in a matchup that saw high winds and a field covered in snow.

The weather was so bad that some players opted to wear gloves. Others traded in their cleats for tennis shoes. On Nov. 25, 1950, Ohio State University faced off against the Michigan Wolverines in a football game that would come to be known as the Snow Bowl.

A snowstorm had ripped through much of the Buckeye State, leaving several inches of snow in its wake and many football fans questioning whether they wanted to brave a subzero windchill to watch the heated rivalry play out at Ohio Stadium.

In a report that appeared in the Mansfield News-Journal on Nov. 26, Associated Press football writer Jerry Liska noted that the snowstorm had, “belted the bottom out of the black market in tickets.” (Those at $3.50 face value had gone for $25 up until the Thursday before the game.) A reported 50,503 fans still showed up, although many seats were left vacant in the upper portion of the stadium.

“[A] wind swept across the Buckeye stadium and the athletes played like they were wearing boxing gloves,” the AP’s Fritz Howell wrote in a report that appeared in Zanesville’s Sunday Times Signal the day after the game.

The weather conditions were the worst for an Ohio State football game since the Buckeyes played in 12 inches of snow against Illinois in 1921. Howell wrote that that there was so much snow on the field it hid the yard lines. The Ohio State coaching staff took measures to make the game as tolerable as possible for the athletes, including using both chemical and electric heating pads on the bench.

Michigan won the game 9–3, with Liska noting that Michigan coach Bennie Oosterbaan had captured his first Big 10 title without his team making a single first down. Ohio State coach Wesley Fesler told reporters after the game that both teams were focused on kicking the ball.

“We just happened to get our [kicks] blocked at the wrong time, I guess” he said. “It was amazing to me that they did as well as they did in such weather.”