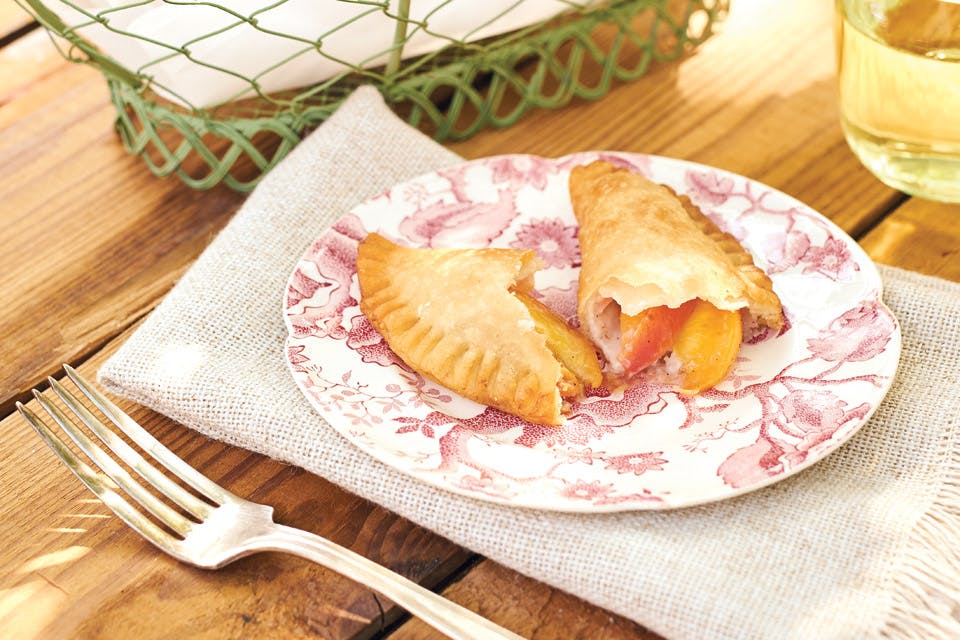 Courtesy of The Old Arcana | Photo by Jeff Downie, food styling by Christine Rice
This comfort-food spot in the middle of tiny downtown Arcanum has made a big name for itself with menu staples such as the Arcana Hot Brown and Bourbon Praline French Toast. This time of year, The Old Arcana prides itself on sweet desserts made with farm-fresh produce, and chef Jeffrey Besecker’s Peach Hand Pies offer a single-serving spin on a seasonal favorite. The dessert starts with a pâté brisée, a classic French pie crust made with chunks of cold butter, ice water, sugar, salt and flour that can be frozen for several weeks.

Chef’s Note: This recipe starts with a basic pâté brisée — the French version of dough used in a pie or tart pastry. “It definitely adds a texture quality. You’re going to get more of a buttery, flaky crust,” says chef Jeffrey Besecker.

Lightly flour work surface and cut dough into 2-inch balls. Roll each dough ball flat into 6-inch circles. Cover half of each dough round with 5 to 6 peach slices, leaving a 1/4-inch rim along the edge.

Brush edges of dough with egg. Fold empty edge over top of peaches and gently press edges together. With a fork, press light ridges around folded edge of hand pie. Chill covered for 1 hour.

Heat 3 to 4 quarts of canola or vegetable oil in a 6-quart stockpot. Warm over medium high until oil reaches 265 F. Lightly place each hand pie into the oil one at a time. Fry until golden brown.

DIRECTIONS
Put flour, salt and sugar in bowl of a food processor and pulse to combine. Add butter and process for about 10 seconds, or just until the mixture resembles coarse meal.

Add ice water, tablespoon by tablespoon (1/4 to 1/2 cup), through the feed tube with machine running, just until the dough holds together without being wet or sticky; do not process more than 30 seconds. Test the dough at this point by squeezing a small amount together. If it is crumbly, add a bit more water.

Divide dough in half and wrap each half in plastic wrap, using a rolling pin to flatten into a disk. Chill until needed. Wrapped in plastic, dough can be frozen for several weeks before using.