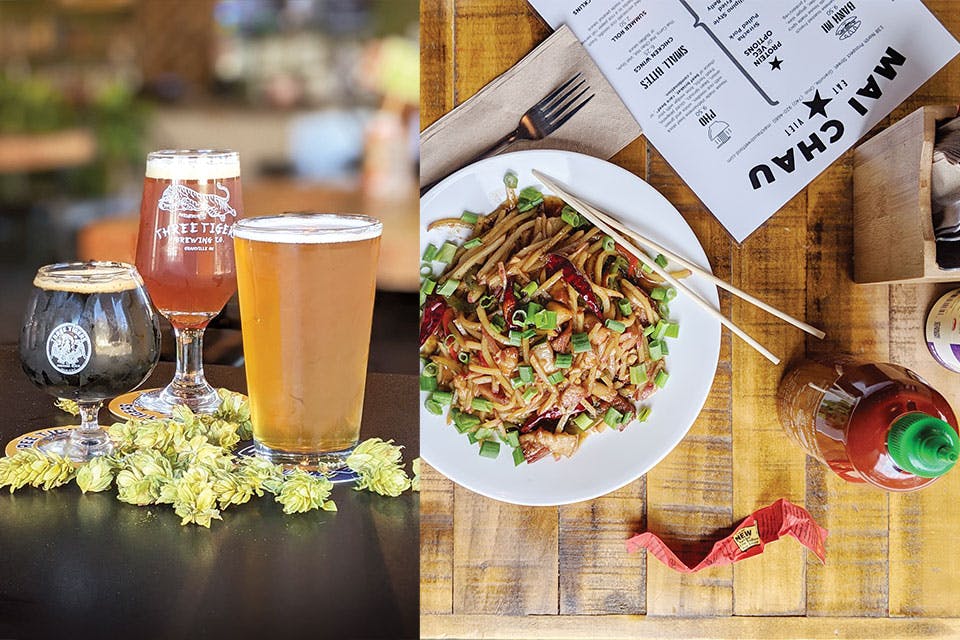 This downtown brewery has a deep connection to the neighboring Mai Chau Kitchen as well as food and drink flavors that go well together.

It all started with a backpacking trip to Asia for what Scott Wilkins thought would be a few months. Now a managing partner at Three Tigers Brewing Co. in Granville, Wilkins recalls that when he reached Vietnam, “I just fell in love with the place and everything about it, especially the food.”

He got a job teaching English and stayed in the country for two years. Upon returning to Ohio, he wanted to share the flavors of Vietnam with people here. He and his wife, Ashley, started the Mai Chau food truck in 2012 and opened a restaurant three years later with Lonnie Hill and Rick Moller. For Wilkins, it was natural to then follow his next passion, brewing, and opened Three Tigers Brewing Co. next door in 2016.

The brewery’s beers on tap range from That Dude OJ pale to Brother Sam oatmeal stout. Guest beers are featured, as well as a selection of bottles and cans, including ciders and seltzers, from regional breweries. Wine and craft cocktails are also available. Beer lovers have plenty of choices to pair with Vietnamese-inspired street-food options from Mai Chau Kitchen. Separated from the brewery space by a wall, the restaurant’s menu includes banh mi sandwiches, steamed buns, rice and noodle bowls, summer rolls and hot pho soups.

Wilkins plans to move the brewery and restaurant into a more spacious old fire station across the street sometime in late fall or early winter, where the two businesses will finally exist in the same space.

“We’ve had such great and enthusiastic support from the local community, both during the pandemic and now with the move to the new location,” he says. “We’re really excited for the next phase and to bring even more great food and drink to our customers.”