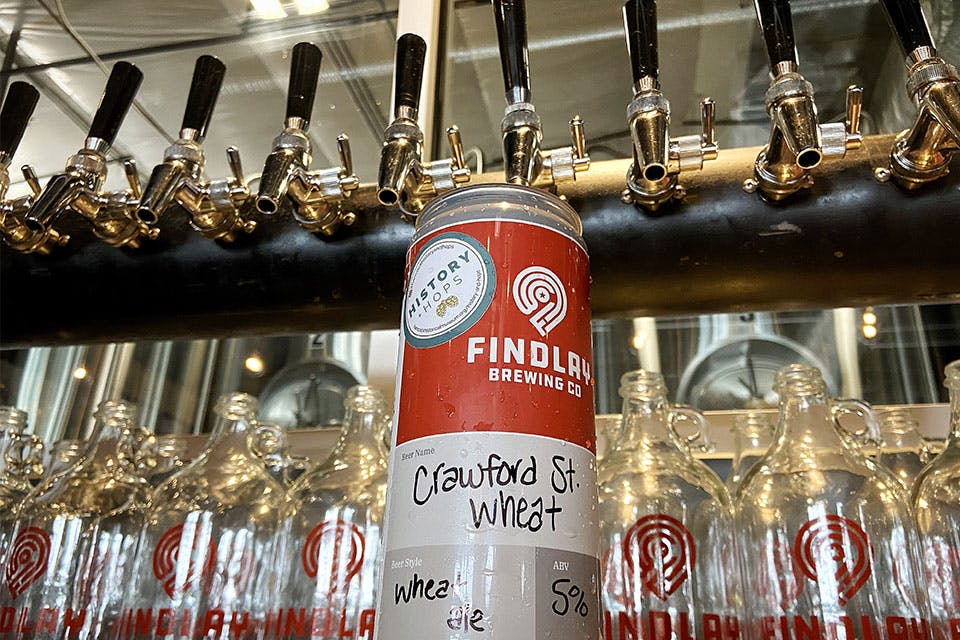 May 2020
BY Amanda Light | Photo courtesy of Findlay Brewing Co.

May 2020
BY Amanda Light | Photo courtesy of Findlay Brewing Co.

As the Hancock Historical Museum and Findlay Brewing Co. both closed their doors as part of Gov. Mike DeWine’s stay-at-home order, the two entities joined forces to plan a seven-week beer series focused on local history.

Running May 12 through June 28, History + Hops highlights a different beer each week bearing locally inspired names, while the history behind each brew’s namesake is highlighted in videos posted on the Hancock Historical Museum’s website and shared in its Instagram feed. Beer fans can pick up a 64-ounce growler of each week’s featured brew for $15 ($9 on Sundays) or a crowler for $11 (three for $30). A portion of sales from each week’s featured beer benefits the Hancock Historical Museum.

“This is the fun part of brewing,” says Aaron Osborne, co-owner and brewer at Findlay Brewing Co. “I love brewing, but I like looking for creative ways for people to experience the beer.”

Although some restaurants and breweries had started to reopen my mid-May, at the time of the program’s launch, Findlay Brewing Co. remained closed. Customers can call ahead to place an order for pickup or curbside delivery.

May 12-17: Floodwater Stout was Findlay Brewing Company’s first recipe inspired by the 2007 Findlay flood. Recalling floods at their previous location and having to place sandbags around the perimeter Osborne chose stout as the style for this drink because he wanted something “murky and dark.”

May 19-24: Crawford St. Wheat is named as after the street Findlay Brewing Co. calls home, so Osborne wanted to make something light with a more celebratory vibe. The street also has a colorful past as a home to brothels and saloons during the Victorian era.

May 26-31: Fort Findlay Vanilla Coffee Stout is named in honor of the area’s origins as a supply depot during the War of 1812, but it also has the contemporary link of using cold brew supplied by local Fort Findlay Coffee in the recipe.

June 2-7: Brilliant Blonde pays homage to the Brilliant City Brewing Co., one of Findlay’s first breweries. Osborne adds that because brilliant is synonymous with light, he chose to go with a light-looking blonde ale.

June 9-14: Hancocked IPA is named after Hancock County, which itself is named after John Hancock, the first person to sign the Declaration of Independence. For this brew Osborne says he chose IPA because he wanted a style that denoted action, adding that he chose something “bold and stronger with a spicy palate.”

June 16-21: Oesterlin Wit is named after Dr. Charles Oesterlin, known as the Father of Findlay’s gas and oil boom in the 19th century. Osborne describes this Belgian Witibier as having a really light, albeit cloudy, style.

June 23-28: Flag City Pale is a nod to the city’s nickname and is what Osbourne calls a “lawnmower” beer, meaning you can easily sip a couple after doing yardwork on a summer afternoon. “If I could make a beer that was red, white and blue, I would,” he says of the brew’s Flag City name “But I couldn’t, so it’s light.”