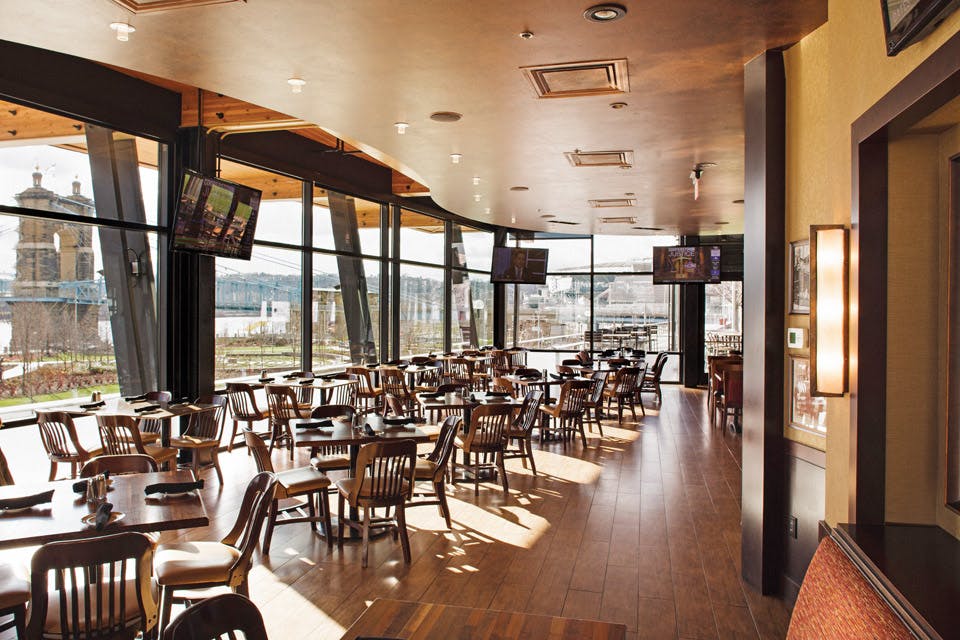 This historic spot celebrates the Queen City’s brewing past at a location that serves up innovative food and scenic views.

Nathan Whittington, executive chef at Moerlein Lager House, admits it’s sometimes hard to tell where the beer tasting ends and the drinking begins. And while the idea of sampling suds sounds like an enviable task, Whittington says it is also vital to the Cincinnati brewpub’s commitment to great food and drink.

So, when Christian Moerlein Brewing Co. vice president of brewing Eric Baumann introduces a new beer, Whittington will sit in the lager house’s Beer Baron Hall banquet room overlooking Great American Ball Park and repeatedly taste the brew until he decides if he’s going to use it in a dish or create menu items to pair with it.

He uses Barbarossa — a double-dark lager with a smooth finish — for braising and finishing richer meat dishes, such as short ribs and pork shanks, and Whittington drizzles his rotisserie chicken with beurre blanc made with the malty and slightly bitter Over-the-Rhine Ale.

“It works out well because it’s got a little bitter finish to it, and then you take it and smooth it out with butter,” he explains. “So it gives a nice contrast of flavors.”

Such unusual-but-satisfying juxtapositions can be found in the riverfront brewery’s decor as well. Built in part to mimic the historic beer tunnels in the city’s Over-the-Rhine neighborhood (including sandstone walls lining the staircase), the lager house’s nod to the past is smoothly contrasted with two levels of bar space surrounded by intimate booths and floor-to-ceiling windows showcasing panoramic views of the Roebling Suspension Bridge, Paul Brown Stadium and northern Kentucky.

“Every room in the restaurant has a different Cincinnati beer theme,” says Baumann, who explains that it was all part of owner Greg Hardman’s plan to revive Cincinnati’s brewing history along the revitalized riverfront, and bring the city’s original brands — bought out or closed down by national competitors — back to town.

A mural of Cincinnati’s original beer barons from the 1800s — including Christian Moerlein — look out over the bar area, not far from a plaque indicating the location of first base when Riverfront Stadium stood where the restaurant and brewery does now. The spot is a tribute to Pete Rose’s record-breaking 4,192nd hit in 1985.

The food menu changes with the seasons and always includes a few items representing the brewery’s German heritage, like roasted Brussels sprouts in a garlic herb butter and white wine sauce and the Beer Baron Brat made with a blend of finely ground chilies and pork.

Whittington showcases offerings not found on the regular menu during beer dinners on the third Wednesday of each month, and new beers are tapped on the first Monday of the month. February’s beer, the Emancipator Doppelbock, delivers hints of caramel and toffee.

“We like to have fun down here and come up with a lot of different recipes,” says Baumann, who has a tart plum wheat beer and a blood orange radler in the works for 2016. “At the end of the day, it’s great to sit down and enjoy your product but also to see other people enjoy the work that we put into things.” — Jessica Esemplare

Angry Mac & Cheese + Northern Liberties IPA:
“It’s kind of a spicy mac and cheese, so it plays well with the bitterness and fruity hops you get out of the IPA,” says Baumann.

Herb-Crusted Salmon + Golden Helles Lager:
“The Helles is a lighter-drinking beer to go with the crabmeat and the butter sauce we use on the actual salmon itself,” says Whittington. “It pairs
well with the seafoods of the entree.”

Pork Shank + Barbarossa:
“[Barbarossa] has a lot of dark fruit notes,” says Baumann, “which plays well with the richness of the pork shank.”