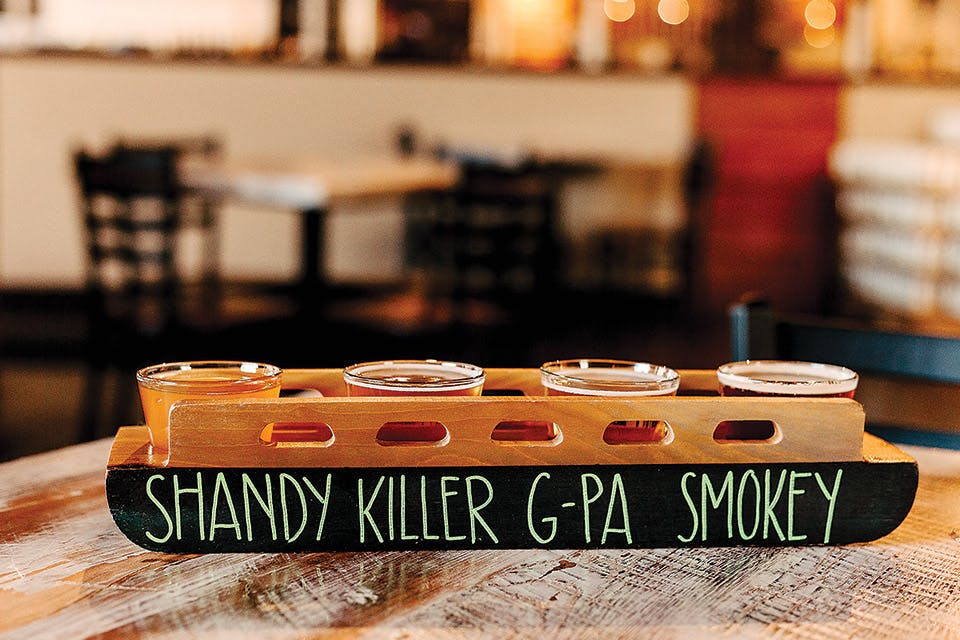 Colin Cook and Joe Karpinski play on Akron history at their brewpub along the Ohio & Erie Canal that also offers a menu of interesting eats.

In 2010, Lock 15 Brewing Co. co-founder Joe Karpinski got all of his party guests into the holiday spirit by bringing a homebrewed version of his Christmas ale to the gathering. When Colin Cook tasted it, he knew Karpinski was on to something. Over the years, the concept for Lock 15 Brewing Co. began to take shape, and in 2018, their seven-barrel brew house opened its doors.

“The location, this old warehouse building on the Ohio & Erie Canal at Lock 15, it just seemed like the perfect marriage for me,” says Cook. “It was the opportunity to create this hospitality experience and really embrace the history of Akron at the same time.”

Lock 15 Brewing Co.’s beer lineup reflects the duo’s devotion to the Rubber City’s past with year-round offerings like Cascade Locks Pale Ale, a citrus-forward beer that’s a nod to the canal locks in the area built between 1826 and 1827. Seasonal brews also pay homage to history, including the Schumacher Mills Peach Cobbler Shandy, a peach-cobbler-pie-inspired ale that’s a tribute to Akron’s Ferdinand Schumacher, whose American Cereal Co. later became Quaker Oats.

“We constantly just try to teach ourselves another little piece of Akron lore and figure out where we can incorporate that into the name,” Cook says.

The space offers a convivial environment to snack and sip, with exposed brick walls, distressed wooden tables, a massive garage-door-style window and a view into the brewing operation. The brewers work with executive chef John Taylor and sous chef Sumer Cape to create a seasonal menu that goes beyond traditional bar fare. Appetizers during our visit included a sausage board, seared scallops and hot tots — potato kegs with house-made sherry queso cheese sauce and scallions. The rest of the lineup is filled with seasonal burgers, salads and “surf, turf and earth” offerings, such as the shrimp and grits with Cajun broth, tomatoes, scallions and baby kale.