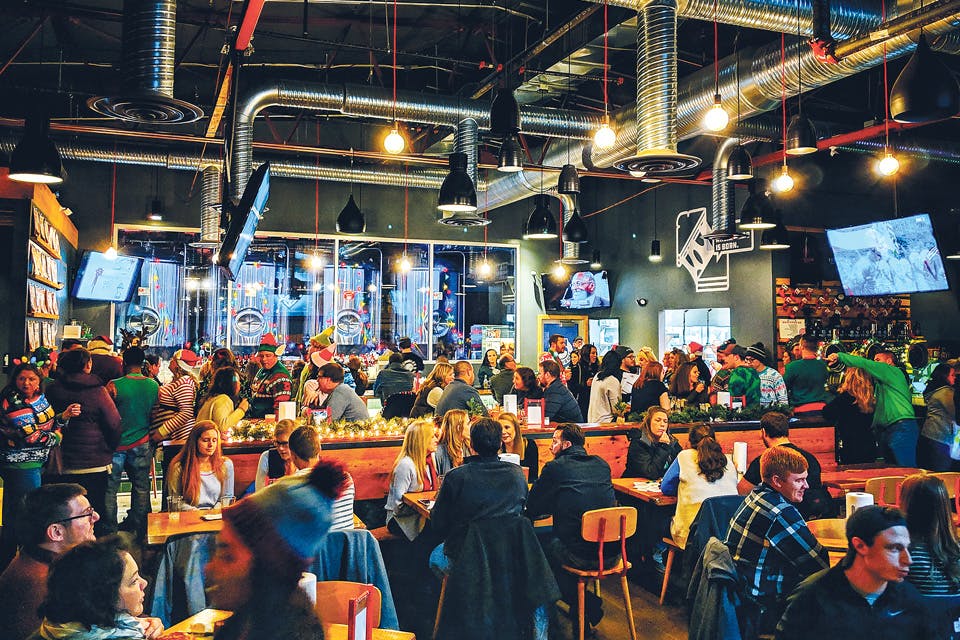 What started as a group of home brewers more than a decade ago has grown into a destination for creative bar food and tasty beers.

The roots of Findlay Brewing Co. stretch back to 2007, when a group of five home brewers started making beer they ultimately began selling from a tiny space along North Main Street. “We used to be open five hours a week and that was it, because everything we made was gone in five hours,” says co-owner Alex Treece, whose father and mother, Steve and Susan Treece, are co-owners of the brewery, along with Josh Heitkamp and brewer Aaron Osborne. In summer 2018, Findlay Brewing Co. opened the doors of its new downtown brewpub, offering 24 taps (including some guest beers) and a menu of creative takes on bar-food favorites.

Get Comfortable: Findlay Brewing Co.’s new space along Crawford Street offers plenty of windows, a roll-up door and lots of wood throughout the brewpub. The feel is open, airy and inviting to those passing by on the street. It’s also a departure from the exposed brick of many of downtown Findlay’s historic buildings. “It was a blending of an industrial and a rustic look,” Osborne says.

Favorite Foods: The eats here span wings, sandwiches, flatbreads and other bar favorites, but there’s plenty of ingenuity throughout the menu, be it the loaded tater tots or the BLT served on a square glazed doughnut. There’s also the option to build your own macaroni and cheese dish and a special hamburger appears each month. “What we’re really good at, and what people are loving now, are our hamburgers,” Osborne adds.

What’s On Tap: The brewery has 18 of its own beers on tap at any given time, including Floodwater Stout. “It was a beer that developed from our very first batch we ever made as home brewers, and then we constantly worked on that recipe,” Osborne says. Other favorites include Brilliant Blonde ale, Houlihan’s Irish Red ale and Ohio Weather, a cinnamon and vanilla porter. But keep an eye out for one-off creations, too. “Almost every two weeks, we have a new beer up there,” Osborne says.