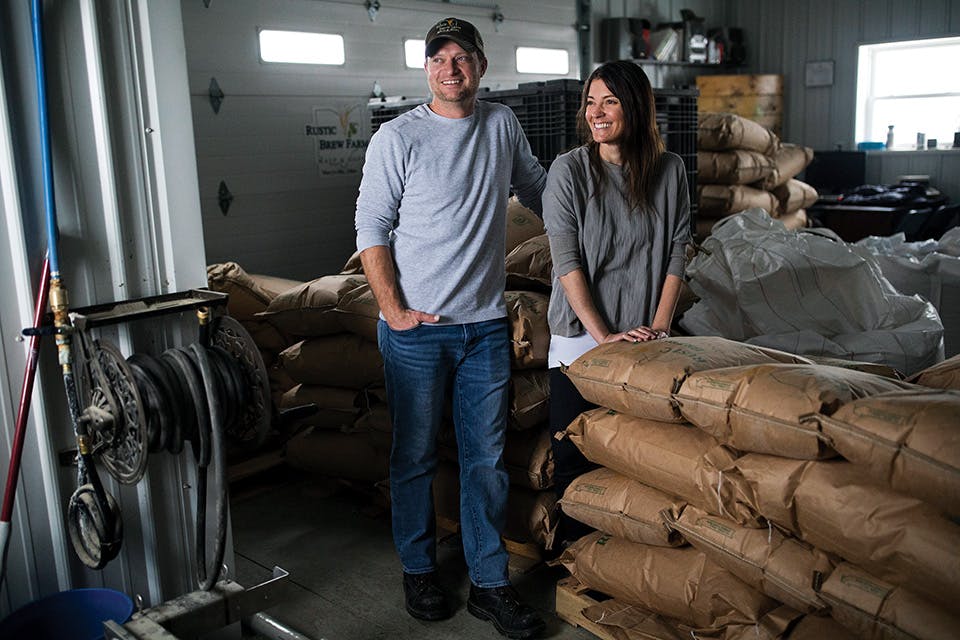 Cunningham began planting barley and hops on his Marysville family farm in 2014 and now supplies a number of Ohio brewers.

Matt Cunningham and his wife, Michelle, knew the family farm needed a leg up in an increasingly challenging agricultural economy. In 2014, the fourth-generation farmer planted barley and hops to supplement the corn, soybeans and wheat he normally grows in Marysville. He built a malt house to malt the barley and started drying and pelletizing his own hops to sell to Ohio’s growing number of craft brewers. Along the way, Rustic Brew Farm was born.

“The decision came from the agricultural side as a way to diversify our farm,” Cunningham says. “Subconsciously though, I think it was a way to connect something popular that I enjoyed back to the farm.”

Growing barley is one thing, but malting it is an art and science all its own.

“To be quite honest, if I’d known what it was going to take to make malt at the beginning, I might not have done it,” he says with a laugh. “But you learn as you go. I just started and jumped into it, and now our malt is great.”

Rustic Brew Farm is a member of the Craft Maltsters Guild. It offers a full array of base malts and also grows Cascade hops, a popular variety in craft beer. The farm’s products have been used by dozens of Ohio breweries, including North High Brewing, Grove City Brewing Co. and Rivertown Brewing Co.

Cunningham says getting to taste beers made with his malt or hops never gets old. The first he had the chance to try was Ill Mannered Brewing Co.’s 40th Pale-llel.

“I’ll never forget the first time I tasted that, but even better was when the person beside me at the bar ordered it and seeing them enjoy it,” he recalls.

Cunningham believes his ingredients can give Ohioans a tangible connection to the state’s agriculture industry.

“A lot has been said about local food … you go to the store and see ‘local,’ but you don’t know what that means,” he says. “With this you see the whole story. We have field days where people can come out and see the ingredients being grown. The story behind the finished product gives a different meaning to ‘local.’ ” For more information, visit rusticbrewfarm.com.