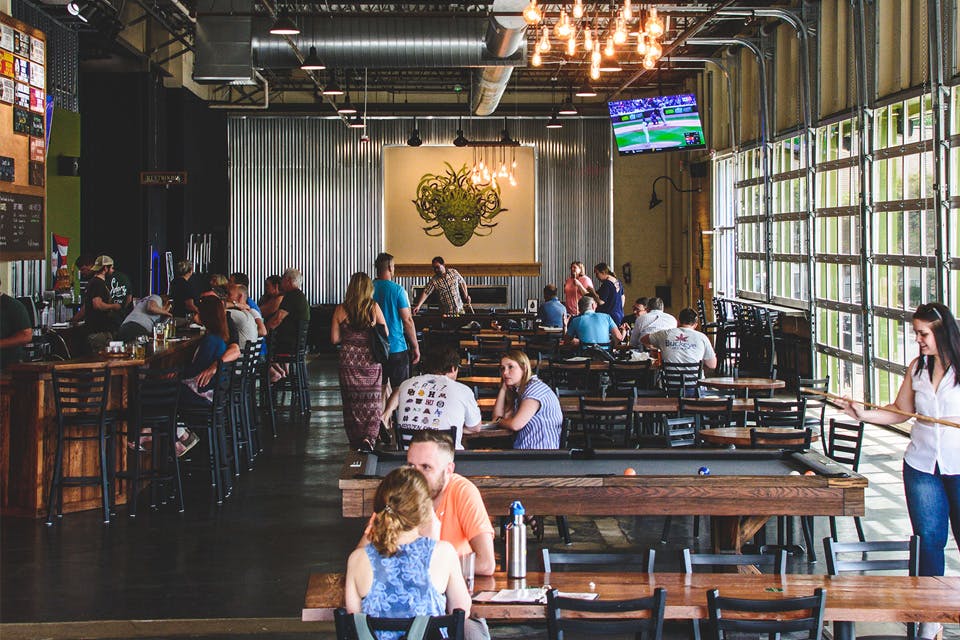 This Dayton-area brewery offers a welcoming space to gather, great beers and a message of goodwill.

Eudora Brewing Co.’s spacious home in the Dayton suburb of Kettering is a far cry from the brewery’s humble beginnings. After starting in a small storefront on the city’s south side in late 2013, Eudora founder Neil Chabut began fermenting ideas for a larger facility, just as he’d developed the brewery’s first recipes in his garage as a homebrewer years earlier.

In January 2019, Eudora Brewing Co. opened its new space in a former Pep Boys mechanic shop. The building feels like it was designed to house a taproom, with high ceilings and plenty of room for tables, couches and arcade games, as well as bay doors that open onto a roomy patio. The patio lets visitors soak up the sun or even relax around gas fire pits in the evening, while the interior contains both cozy corners and open spaces, as well as plenty of entertainment options.

“I wanted it to feel kind of like you’re hanging out with your buddies in the garage or on their back porch,” explains Chabut. “It was important for our space to feel like a community gathering place.”

A small kitchen provides bright food options such as salads, a hummus plate or street tacos, alongside heartier options like burgers, poutine or grilled cheese sandwiches. Many of Eudora’s most beloved beers hearken to Chabut’s homebrewing days, like Thunderball Oatmeal Stout, Mother Fuggle Brown Ale or Bangarang! IPA. The rotating beers range from easy-drinking lagers to hazy New England-style IPAs. A few stronger Belgian beers make appearances as well, such as Le Cheval Magique, a Belgian Golden Strong Ale that’s light on its feet even at 8.5% ABV. For those looking to get a taste of the brewing life, Eudora offers a brew-on-premises program that allows participants to make selected recipes with the help of a professional brewer.

Eudora is not only a gift to the Gem City, it also works to provide clean water to places in need around the globe, and that message of goodwill is built right into the brewery’s name.

“‘Eudora’ is Greek for ‘good gift,’ ” says Chabut. “We’re lucky to live in a place with abundant clean water, and we want to share that gift with people who aren’t so fortunate. We donate a portion of every sale to Charity: Water, a world-renowned charity that brings clean water to remote areas of the world.”