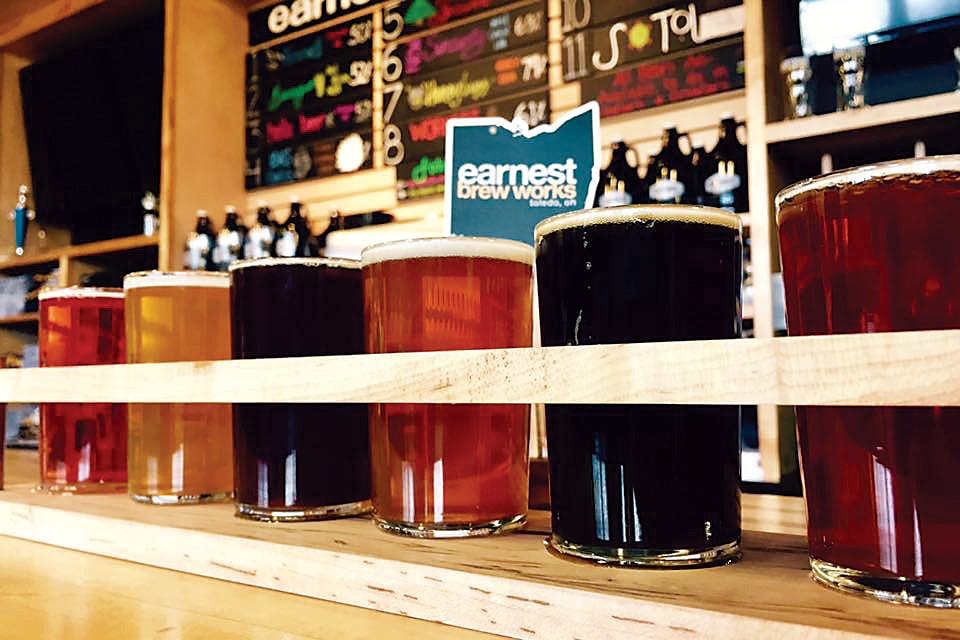 Scot Yarnell and Keefe Snyder once worked in very different spheres: Yarnell as an engineer in charge of servicing X-ray equipment in local hospitals, Snyder as a patent lawyer. They found common ground, however, as part of a Toledo home-brew club, where they forged a friendship. As they helped one another with personal brewing projects, the prospect of creating a business crystalized. In 2016, they opened a tasting room with 15 taps in Toledo.

What’s in a Name: Brewing beer is one thing. Bestowing a fitting moniker is another. Yarnell and Snyder embrace a sense of whimsy when it comes to naming their brews: Throwing Shade, New-Sincerity and Have a Nice IPA, to name a few. Sometimes, they even create a recipe around a particular name. “Hello Beer came out name first,” Yarnell says of the brewery’s hibiscus ale. “I saw someone had a sign in their yard for their home-based business, Hello Computer. I thought of Hello Kitty right away. I thought, I have to make a beer that’s pink.” Yarnell used hibiscus for color and then spiced the beer with orange peel and coriander.

Going Big: With 15 varieties available in Earnest Brew Work’s taproom at any given time, all beer lovers who visit will find something they like. But Yarnell and Snyder definitely have a soft spot for strong quaffs. “We keep experimenting with high-alcohol beers,” says Yarnell. “We just brewed one called Orion, after Orion the hunter, the constellation. That one is a black imperial wheat. It’s really super black, but it’s not going to come off as a stout. It’s going to go about 11 percent [alcohol].”

Getting Creative: Yarnell and Snyder are IPA fans at heart, but that doesn’t mean they limit themselves to hops. “We play a lot with different kinds of specialty malts, especially with our dark malts,” says Yarnell. “A lot of our darker beers use a combination of the roasted barley. We also use midnight wheat [and] black patent malt, which has a really nice roast bitterness flavor.”  They don’t stop with the usual ingredients, either. “We have a beer called Crunchy Hippie,” Yarnell adds. “It’s got a lot of cherries in it, and everything you’d find in a granola bar, including wheat, oats, honey, raisins. … The cherries add a little something special.”