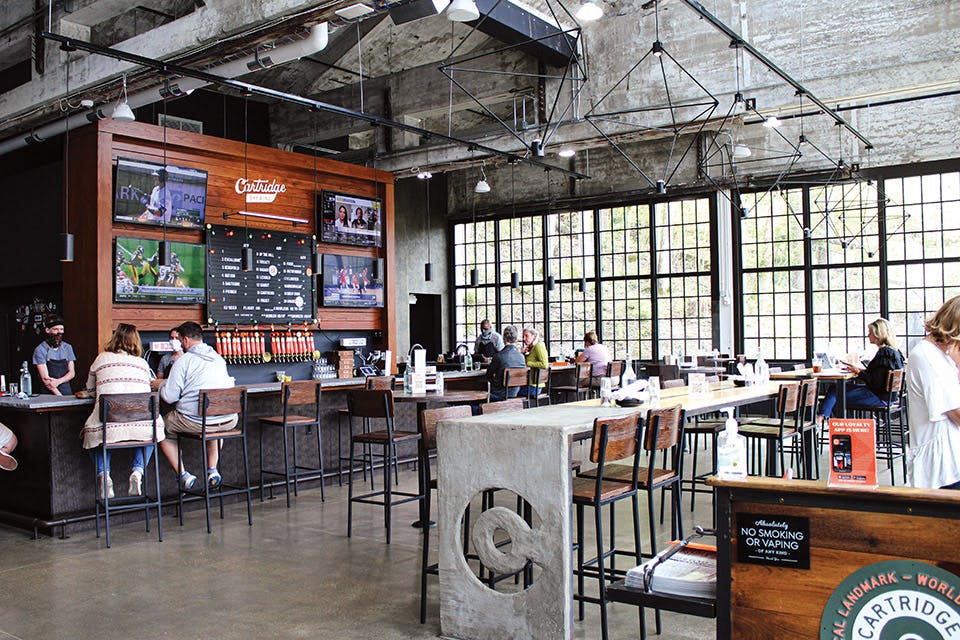 This spot offers an oasis where you can fuel up along the Little Miami Scenic Trail, but it’s also a destination worthy of seeking out on its own.

Biking along the lush Little Miami Scenic Trail, the complex housing Cartridge Brewing comes upon you as a delightful shock. The home of the former Peters Cartridge Factory sits beside the Little Miami River, lost in the tree-covered trail that runs along it. The company was started in 1887 to make rifle cartridges and armaments and grew into a multibuilding complex through 1916. Now, much of it is home to 134 luxury apartments, while Cartridge Brewing is nestled into a single-story, window-covered area in the back of the old ammunition factory.

“Our attraction to the site was immediate,” notes Cartridge Brewing co-founder and COO Kyle Hackbarth. “It’s just a once-in-a-lifetime location, an area icon that had been sitting vacant for 50 years.”

Now, instead of the grinding of lathes and clanging of presses, the brewery’s airy, 10,000-square-foot space is filled with the sounds of locals noshing on upscale pub fare and sampling beers that run the gamut from lagers and ales to malty stouts and porters. Beers with names like Leaded and Primer reflect the ammunition-making heritage of the space, while others are a nod to Hackbarth’s military background. A beer named Care Package was inspired by his year-long deployment to Afghanistan, while another named Bastogne pays homage to the Belgian town where his Army unit (the 101st Airborne Division) made a famous stand against German forces during the Battle of the Bulge.

The brewery’s menu of upscale pub fare includes sharable charcuterie boards, bowls of fries and wings as well as Detroit-style pizzas, an array of sides, sumptuous desserts and sandwiches.

Opening in 2020, the brewery is located about 50 yards from the Little Miami Trail, and Hackbarth and his wife, Lindsey, have made their place a welcoming haven for the bicyclists, runners and walkers who frequent the path. The brewery is building partnerships with local bicycle shops, the Ride Cincinnati charity ride, a local fitness studio and run clubs. Their loyalty app even has a built-in payment option, so active trail users don’t need to bring a wallet.