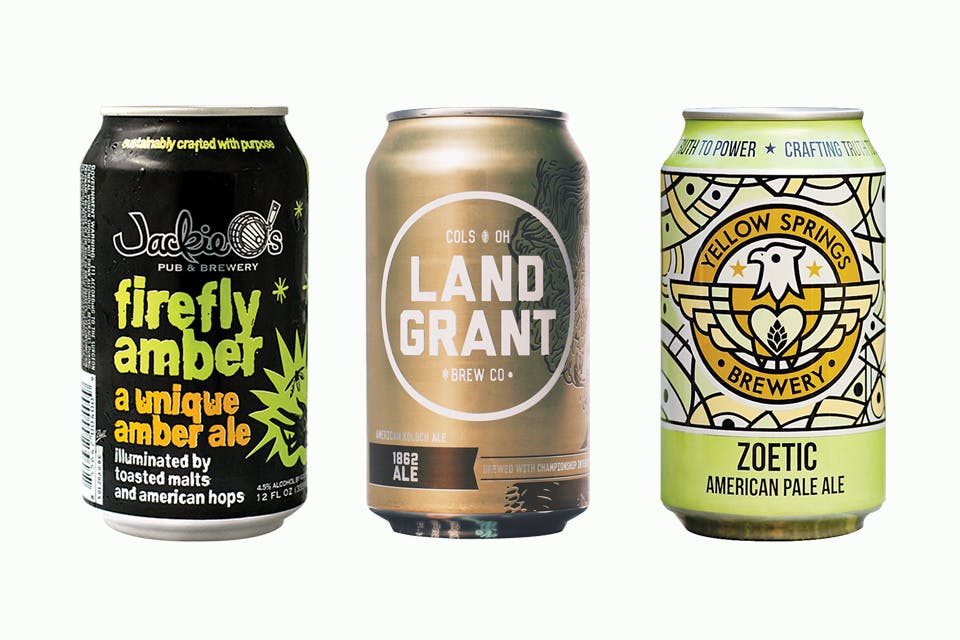 Can Art, Brews for a Cause & More

From the stories behind a few of our favorite beer can designs to breweries working for a good cause, we hope you enjoy this sampler.

Image Conscious
These three breweries are known for their beautifully designed beer cans. Here’s the story behind them.

Yellow Springs Brewery, Yellow Springs
Located along the Little Miami Scenic Trail, Yellow Springs Brewery is a hot spot for thirsty cyclists, but the brewery’s notoriety has expanded beyond Greene County thanks to beer cans designed by graphic artist Don Pendleton. The eagle at the center represents the American entrepreneurial spirit, while the brewery changes the color palette of each of its creations to reflect its ever-evolving nature. yellowspringsbrewery.com

Land-Grant Brewing Co., Columbus
Land-Grant Brewing Co. aims to embrace an old-fashioned, Midwest manufacturing vibe in the semi-retro and colorful look of its beer cans. Co-founder Walt Keys explains the idea was to create something recognizable and attractive, while also paying tribute to the brewery’s location in a former elevator factory. Keys and co-founders Adam Benner and Quintin Jessee also tell the story of their beers with fun, baseball-card-style beer cards that accompany taproom flights. landgrantbrewing.com

Jackie O’s Pub & Brewery, Athens
Jackie O’s Pub & Brewery has made a name for itself with beer cans and bottle labels that highlight and embrace artists. Some of the most recognizable are Bryn Perrott’s colorful can designs for Jackie O’s varieties such as Mystic Mama IPA and Firefly Amber ale. Nearly all of her colorful illustrations are presented on a black background that make the lively designs seem to leap off the can. jackieos.com

For a Good Cause
These breweries get creative with fundraisers and initiatives that give back to the community.

Fifty West Brewing Co., Cincinnati
Fifty West Brewing Co.’s annual “Punch Out” fundraiser invites employees from roughly 20 Cincinnati-area breweries to duke it out in a ring in a series of six to eight fights, with a portion of the proceeds going toward expanding the Little Miami Scenic Trail. Fifty West co-founder Bobby Slattery says the brewery’s aim is to “help you get off the bar stool [to] do something active, then come back and have a beer.” fiftywestbrew.com

Clubhouse Brewing Co., Warren
West Point graduate Zack Dean served in Iraq and Afghanistan before earning his master’s degree in accounting and teaming with his home-brewer dad to open Clubhouse Brewing Co. in 2017. The upstart brewery employs veterans and supports those who’ve served through donations and drives. You can even prebuy a beer for a veteran or first responder to enjoy when they stop in. clubhousebrewing.com

Urban Artifact, Cincinnati
Urban Artifact is known for its sour and fruit-focused beers, but it also runs its business with the community in mind. The brewery was a 2019 winner in the San Francisco-based Good Food Awards, which recognizes food and drink purveyors that source from local farmers and suppliers. It was recognized for its dry-hopped, barrel-aged sour Orbexilum made with hops from Dave and Nina Volkman’s Ohio Valley Hops. Only 21 U.S. brewers qualified as finalists. artifactbeer.com

Freshly Tapped
Sample a trio of craft breweries that have opened their doors within the past 12 months.

Inside The Five Brewing Co., Sylvania
Brandon Fields, former punter for the Miami Dolphins, and Chris Morris, former offensive lineman for the Carolina Panthers, have more in common than the NFL. In May 2018, they opened Inside the Five. Beers range from The Devil Wears Hoodies, a New England-style IPA, to Megaphone, an Irish red ale named in honor of the trophy Michigan State and Notre Dame play one another for each year. insidethefive.com

Olentangy River Brewing Co., Lewis Center
The Columbus suburb of Lewis Center didn’t have a craft brewery, so Ryan Wilkins and Scott Schweitzer opened one in November 2018. Olentangy River Brewing Co. serves as a coffeehouse by day and a brewery by night (or the opposite, it’s really up to you) thanks to a partnership with Columbus’ Roosevelt Coffeehouse. Styles range from Alum Creek Beach Blonde Ale to Roosevelt Coffee Stout. olentangyriverbrewingcompany.com